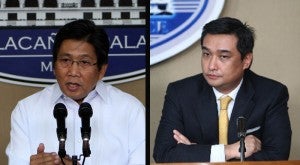 President Aquino has let go of his designated communication strategist Ricky Carandang (right) as a Malacañang faction that includes Sonny Coloma (left) and that is identified with Vice President Jejomar Binay has continued to assume a more prominent role in his messaging program. INQUIRER FILE PHOTOS

MANILA, Philippines—President Aquino has let go of his designated communication strategist as a Malacañang faction identified with Vice President Jejomar Binay has continued to assume a more prominent role in his messaging program.

The Palace on Thursday announced that Aquino had accepted last Tuesday the resignation of Secretary Ricky Carandang, the head of the Presidential Communications Development and Strategic Planning Office (PCDSPO).

The Inquirer learned that Carandang had tendered his resignation last Monday, a few days after joining presidential spokesman Edwin Lacierda and Abigail Valte, the deputy spokesperson, in Singapore for a meeting of the Asia-Pacific Economic Cooperation (Apec) secretariat.

Undersecretary Manuel Quezon III will “oversee” the PDSPO after Carandang’s resignation takes effect on Dec. 31, said Lacierda, who also announced the appointment of officer-in-charge John Philip Sevilla as commissioner of the Bureau of Customs.

Lacierda could not say what prompted Carandang, a former ABS-CBS newsreader, to quit, more than three years after joining Malacanang’s communications group, the restructured former Office of the Press Secretary.

Lacierda said he did not see the lone copy of Carandang’s resignation letter, “so I don’t know the reason.”

“But certainly, as any public official, he wants to return to the private sector,” Lacierda said, adding that he was “very sad about [Carandang’s] departure.”

“I believe that he has done a commendable job as the PCDSPO secretary when most of the time you don’t see him because he often works behind the scenes, meeting with several Cabinet secretaries, meeting with the President discussing also messaging,” he said.

Carandang’s resignation—and the President’s decision to accept it—was not triggered by a single incident but by a “confluence of events,” partly a result of occasional differences with Aquino, the Inquirer has learned.

But Lacierda said he didn’t think that Aquino’s acceptance of Carandang’s resignation meant that the President was “not happy” with Carandang’s performance.

“I don’t think so. One very certain fact was that the President thanked Ricky for his service to the country,” he said.

According to Lacierda, Carandang had mentioned to him that “he believes that he has done his job, that he would like to return to the private sector and that he will wander the ends of the earth seeking wisdom.”

Carandang’s resignation came as Secretary Herminio Coloma Jr., who is identified with the Binay camp, continued to become more conspicuous as a spokesman for the President. Coloma heads the Presidential Communications Operations Office (PCOO), which “supervises all major government public communication and mass media organizations.”

On Thursday, Coloma’s office issued a press release describing him as “press secretary.”

Lacierda said he knew of no “changes” in Malacañang’s communications structure. “That is something for us to discuss, eventually, if there would be any,” he said.

Asked if Carandang’s resignation signaled a takeover of the “Samar” faction, with which Coloma is identified, Lacierda said: “You know, it’s all up to the President. What will happen to the Communications Group, it will all depend on further discussions with the President.”

Carandang is identified with the “Balay” faction of Interior Secretary Mar Roxas, who was defeated by Binay in the 2010 vice-presidential race.

The creation of Carandang’s PCDSPO and Coloma’s PCOO was seen as the President’s way of accommodating both factions, which were said to be battling for control over his communication strategy at the start of his administration.

Coloma began presiding on a more regular basis at the Malacañang press briefings in October, after the President reportedly expressed displeasure over how the Lacierda group had handled the controversy over the Disbursement Acceleration Program (DAP).

But Coloma reportedly also came under fire recently when he downplayed the media killings under the Aquino administration, and defended the looming power rate adjustment and the granting of parole to ex-Batangas Gov. Antonio Leviste.

The President has ordered a review of the Leviste parole grant, questioning why Leviste had been credited for “good conduct” when he was once caught outside the prison while serving his sentence.