‘Killing of journalists a nat’l catastrophe’ 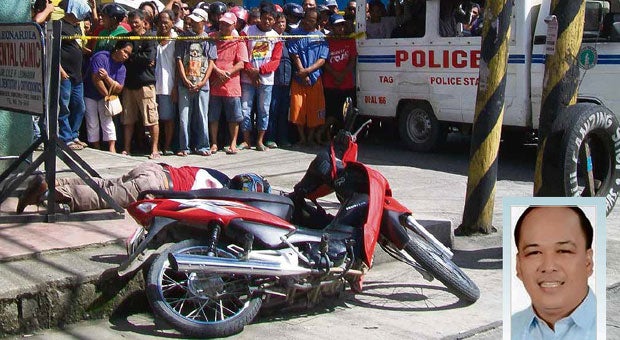 Radio journalist Rogelio Butalid lies dead outside the Radyo Natin station in Tagum City after being shot by a lone gunman on Wednesday. Butalid (inset) was also a village councilor. FRINSTON LIM/INQUIRER MINDANAO

An international human rights watchdog has urged President Aquino to declare the deadly attacks on Filipino journalists a “national catastrophe,” saying that the situation “threatens civil liberties” in the country.

Two other groups—Reporters Without Borders and the European Union delegation to the Philippines—issued statements condemning the attacks and urging the government to take decisive action.

The killings of three journalists in Mindanao in the past two weeks are “no less than a war against the media” that needs immediate action, Carlos Conde, Philippine researcher of the New York-based Human Rights Watch (HRW), said on Thursday.

Rogelio Butalid, a block-timer for 107.9 FM Radyo Natin, was shot dead by a lone killer in Tagum City in Davao del Norte province on Wednesday, shortly after he finished his radio program. The night before, unidentified men shot and wounded Jonavin “Jhey-R” Villalba, a radio reporter, in Iloilo City.

Radioman Michael Milo was gunned down in Tandag City in Surigao del Sur province on Dec. 6. A week before, another radioman, Joas Dignos, was killed in Valencia City in Bukidnon province.

So far, 27 journalists have been killed since 2010 when Aquino assumed power, according to the National Union of Journalists of the Philippines.

The HRW was unhappy with the response the Aquino administration to the killings, Conde said in a dispatch. While government officials said they were committed to ending the attacks on journalists, they also downplayed them, he added.

“I understand the frustration on why there are no results [yet], but I can assure you that the government is working and investigating these matters,” presidential spokesman Edwin Lacierda said in a press briefing.

Describing the recent spate of media attacks as “alarming,” Justice Secretary Leila de Lima said in Manila that the National Bureau of Investigation was looking into the cases for eventual referral to the special investigation teams (SITs) of prosecutors and personnel of the NBI and the Philippine National Police.

Administrative Order No. 35, which was issued last year, created the SITs, as well as the special oversight teams (SOTs), to “address grave human rights violations, such as extrajudicial or extralegal killings, enforced disappearance and torture.”

De Lima said in text messages to reporters that the President was aware of the ongoing investigations.

“In the face of all this violence against journalists, we urge the police to deploy whatever means are necessary to arrest those responsible and end the unacceptable impunity,” the Paris-based Reporters Without Borders said in a statement. “Only a firm response from the authorities will deter others from targeting news providers.”

The Philippines is ranked 140th among 179 countries in the 2013 Reporters Without Borders press freedom index.

A statement of the EU delegation recalled the 2012 resolution of the European Parliament, which urged the Philippine government to take further measures in order to end impunity for extrajudicial killings, enforced disappearances and torture and bring those responsible to justice.

In Tagum, police authorities said Butalid, who was also a barangay (village) councilman, could have been killed because of his involvement in politics, his job as a radio commentator and personal grudges.

At the time of his death, Butalid hosted a radio program paid for by the National Electrification Administration faction of the Davao del Norte Electric Cooperative, which is embroiled in a violent dispute with a procooperative faction.

Tagum Mayor Allan Rellon, an ally of the broadcaster, announced a P100,000 reward “from personal funds” for information leading to the resolution of the case.

In Milo’s case, police authorities in Tandag on Thursday filed a murder complaint in the city prosecutor’s office against eight people, including the estranged wife of the slain broadcaster.

Milo was killed by three gunmen while he was driving home on a motorcycle on Dec. 6.

Named respondents in the complaint were Milo’s widow, April, her siblings Arnel and Bernie Ann Fernandez, her alleged lover PO1 Hildo Patrimonio and four John Does.

As of Thursday, police investigators had yet to identify the gunmen behind the attack on Villalba as he was opening the gate of his house in Iloilo City’s Jaro District. The radio reporter was wounded in both feet and is recuperating at the hospital.

The empty shells and slugs recovered from the crime scene were sent to PNP national headquarters in Camp Crame for ballistic tests, according to Chief Insp. Rhea Santos, Jaro police chief.

In a statement, PNP Director General Alan Purisima said members of Task Force Usig, a special police unit under the PNP Directorate of Investigative and Detective Management, were monitoring all cases of violent attacks on journalists.

“At this early stage of investigations, there are no peculiar indication [that would show] a link that connect the three incidents [of killings],” Purisima said.

The country’s slow justice system has contributed to the persistence of impunity against media practitioners, two senators said on Thursday in Manila.

“The only way you can deter the killings is by making sure that justice is carried out in a timely manner. It takes years before a suspect is caught and brought to trial,” said Sen. Grace Poe, chair of the Senate committee on public information and mass media.

“Criminals are emboldened because hardly any suspected media killers are actually sentenced and thrown in jail,” Poe said.

“The personalistic and vindictive politics prevalent in some areas also breed this kind of culture which is totally unacceptable in a civilized and humane society,” she said.

“The slow judicial process and the lack of apprehension, prosecution of perpetrators of violence against media practitioners could be contributory to the continued violence,” Legarda said.

Conde of HRW’s Asia division urged the police to “look beyond the gunmen to the individuals ultimately responsible” for the killings.

“They should probe threats against journalists to prevent and deter future attacks. The government also needs to work with media companies, particularly broadcast networks, on strategies to better protect journalists,” he said.

Journalists in Tagum and Surigao del Sur said they were fearful because the masterminds had remained unpunished.

“We hope this will hasten the process for the filing of the necessary information in court, thus, leading to the eventual arrest of the perpetrators,” Communications Secretary Herminio Coloma said in a statement on Thursday in Manila.

As in any other crime, Lacierda said authorities would have to “determine the motivations” behind the killing of journalists. “The responsibility of government is to investigate any crime whether it’s a media killing, whether it’s a murder by an ordinary person,” he said.

In the House of Representatives, the party-list Bayan Muna on Thursday filed a proposed resolution to condemn the continued killings of journalists.

House Resolution No. 526 authored by Representatives Neri Colmenares and Carlos Zarate, also urged the President “to carry out comprehensive and concrete actions to bring the perpetrators before the bar of justice.”

In a statement, Rep. Samuel Pagdilao Jr. urged Task Force Usig and the Criminal Investigation and Detection Group (CIDG) “to immediately identify, charge and arrest the gunmen as well as the masterminds behind the killings in order to give justice to the families of the victims.”

“Protecting the media from violent attacks perpetrated by those they have reported for involvement in anomalies and illegal activities is a must, to bring to an end the culture of impunity relative to attack on the media,” said Pagdilao of the Anti-Criminality and Terrorism through Community Involvement and Support (ACT-CIS) and a former CIDG chief.—With reports from Chris Panganiban, Frinston Lim, Allan Nawal and Germelina Lacorte, Inquirer Mindanao; Christian V. Esguerra, Norman Bordadora, Christine O. Avendaño and Marlon Ramos in Manila; and Nestor P. Burgos Jr., Inquirer Visayas