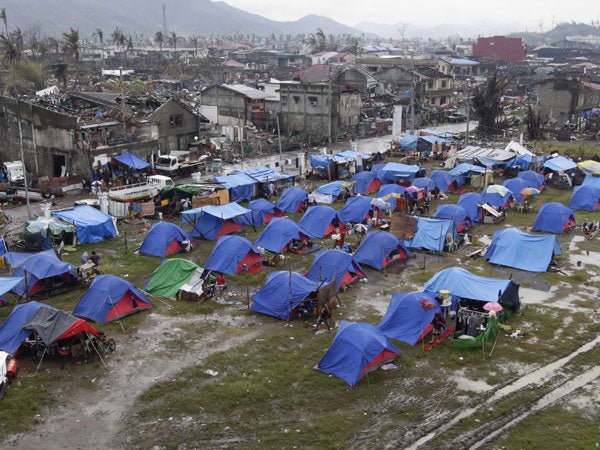 MANILA, Philippines—Supertyphoon “Yolanda” (Haiyan) has made it easier for land-grabbers to take land from the landless in areas ravaged by the storm, according to the rights groups Focus on the Global South and the Rural Poor Institute for Land and Human Rights Services (Rights) Network.

On the island of Sicogon in northern Iloilo, where practically all houses were wiped out by Yolanda, some 6,000 families have not been able to rebuild their homes on a property claimed by a developer, the group said.

“They don’t want us to rebuild. They are not allowing us to buy supplies,” said Amelia dela Cruz, 57, a resident of Carles town, who went to Manila to seek help.

She said part of the 809-hectare property claimed by the Sicogon Development Corp. was a 72-hectare strip of public land being occupied by residents of two barangays (villages), including Alipata, where her own family lived.

But after the storm, the developer allegedly began blocking efforts by the residents to rebuild their houses and threatened to demolish the entire settlement. Most of them have only been able to set up tents using tarpaulin, she said.

“They (developer) said Yolanda helped them demolish our houses, that Yolanda was on their side,” Dela Cruz said.

She said the developer claimed that the whole property had been bought by a giant real estate firm intending to establish resorts in the area.

The firm purportedly gave the residents two options: to receive P150,000 in exchange for voluntarily leaving, or to be relocated on another island, Dela Cruz said.

Leaders of the Focus on the Global South and Rights Network blamed the slow and ineffective implementation of various land laws, including the Comprehensive Agrarian Reform Program (CARP) and the Indigenous People’s Reform Act, for the proliferation of land-grabbing.

The two NGOs urged the Philippine government to pay close attention to land-grabbing in Yolanda-hit places, and to “stop investments in land and agriculture that not only displace the rural poor but also violate human rights and land laws.”

“Now is the time to stop bickering in government and look at our issues, especially when funding for CARP is uncertain beyond 2014 and typhoon Yolanda has made us more land insecure,” the groups said.

“We need public investments that support progressive realization of the right to adequate food in the context of national food security,” it said.

The groups vowed to intensify the campaign against land-grabbing in the country, as well as the campaign for agrarian reform, and control of ancestral domains and waters of the rural poor.