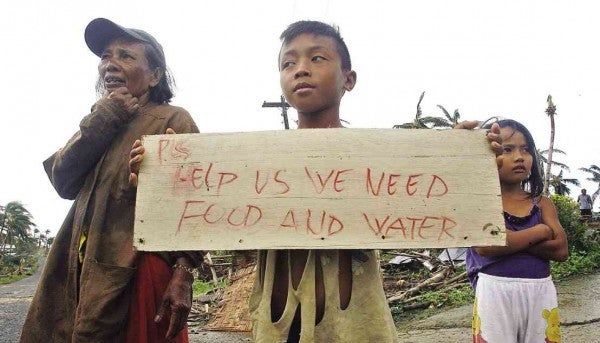 A young man holds up what could be a sign of desperation among the people of Quinapondan in Eastern Samar, one of the areas that suffered the brunt of Supertyphoon “Yoland” but which has received little attention from the government. RAFFY LERMA

FUKUOKA, Japan—The extent of the suffering of Filipinos struck by Supertyphoon “Yolanda” (international name: “Haiyan”) has touched the hearts of the Japanese here, as it brought back memories of the disasters that devastated their country, including the Great East Japan Earthquake in 2011.

Japanese taxi driver Mikio Munayama gave me a sad look upon learning that I was from the Philippines. When I handed him the 2,300 yen cab fare before getting off at Fukuoka International Airport on Friday night, he gave back 1,000 yen while talking in Nippongo, which I did not quite understand.

“Filipin… Filipin,” he repeatedly said. “Haiyan, Haiyan, Haiyan.” That was when I realized he wanted to give his donation to the victims of Yolanda.

When I asked for his name, he tore a piece of paper and wrote “Mikio Munayama.” Before receiving it, I pulled out my iPhone 5 and took a picture of him.

I told him I will turn the money over to the Inquirer, which is accepting donations for the supertyphoon victims. I was not really sure if he understood but he bowed his head repeatedly.

The Japanese moderator introduced me first, among 13 other Asian journalists who served as panelists, when I was seated at the center, probably as a courtesy and show of sympathy for the Filipino typhoon victims.

Toshinari Oka, manager of the International Affairs Division of the Kyushu Economic Federation said their people watched the tragedy live on TV and were also greatly affected by the picture of devastation.

He said some groups were mobilizing support and that assistance would be coursed through Japanese organizations, which in turn would forward this to international organizations helping the disaster victims in the Philippines.
RELATED STORIES: