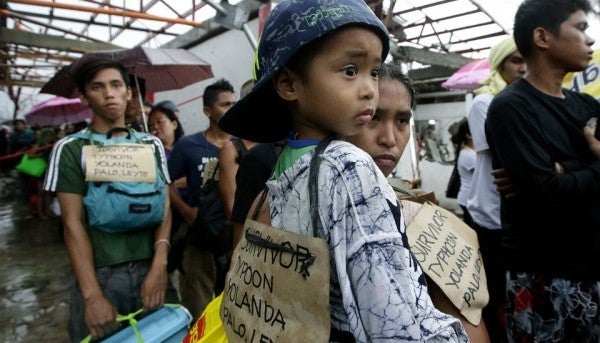 Typhoon survivors hang signs from their necks as they queue up in the hopes of boarding a C-130 military transport plane Tuesday, Nov. 12, 2013, in Tacloban, central Philippines. The typhoon, known as Haiyan elsewhere in Asia but called Yolanda in the Philippines, was likely the deadliest natural disaster to beset this poor Southeast Asian nation. AP FILE PHOTO

FUKUOKA—Before they can rebuild their lives, they have to “reconstruct their hearts.”

Yoshinobu Fukasawa, United Nations Human Settlements Programme (UN Habitat) regional director for Asia and the Pacific, told the Inquirer that the more than 13 million Filipinos affected by Supertyphoon “Yolanda” (international name: “Haiyan”) should stop blaming the government for the slow response to the disaster in order to fast-track the rebuilding of the devastated areas.

“I want to stress that the people need to reconstruct their hearts, too. At the end of the day, it’s not the government but the people themselves who need the reconstruction,” Fukasawa said.

“Unless the people recover by themselves, who needs the reconstruction? The government only assists the people to let them regain the power and move on. That is very important,” he said.

Fukasawa said the Philippine government’s handling of the situation after the disaster was “not bad” at all given the magnitude of the calamity vis-a-vis the government’s limited resources.

He said that while rich economies could somehow mitigate the impact of disasters like Yolanda, it is, however, difficult for weaker economies, as it would be too costly and not good to the economy.

He said the Philippines was receiving substantial support from the international community and had implemented an organized way of receiving assistance from donors.

“Before, the international agencies just fly in without informing the government but this kind of thing does not happen anymore.”

Fukasawa, who was himself was engaged in the post-disaster reconstruction of Kobe for several years, admitted that rebuilding takes time.

Superficially, infrastructure reconstruction can be done in a short period of time with adequate funding, he said.

But the victims will have to stay for years in a temporary shelter before they can manage to find a permanent resettlement place, which also takes time, he added.

He said assistance should be delivered in such a way that it would help people to move on rather than just letting them survive for the moment. That, he said, was the Habitat principle.

Fukasawa led the UN Habitat group, who arrived in Manila recently to assess the mode and extent of assistance the UN organization would provide in terms of adequate shelter as well as technical expertise for reconstruction efforts in the devastated provinces.

The UN official was in Kyushu this week as guest for the UN Habitat’s 8th Asian City Journalists Conference, where the Inquirer served as panelist along with 13 other Asian journalists, who joined the discussions on issues ranging from urban mobility and bridging Asia and Kyushu.

The UN Habitat has been actively engaged in recovery and reconstruction efforts following major disasters in the region, such as the tsunami in the Indian Ocean, Indonesia, Maldives and Sri Lanka; the earthquake and floods in Pakistan, and Cyclones “Nargis” and “Giri” in Burma (Myanmar). It has advocated a seamless transition from the emergency to the recovery phase at the center of their recovery processor or what it calls the people’s process.

In this process, the people are empowered to organize, make decisions, support each other and be responsible for the process of rebuilding their own homes and lives.

Sachiyo Hoshino, assistant to the UN Habitat director, said the UN Habitat provided cash and supply assistance directly to the people affected by the typhoon by organizing them into groups that would help each other in the construction of their permanent dwellings.