Roxas to Romualdez: Don’t twist the truth, we did everything to help | Inquirer News
Close
menu
search 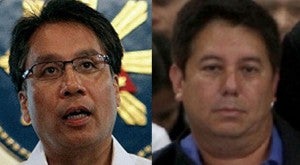 (“There is an audio recording. We won’t allow cajoling, twisting of truth to prevail because we have on record what was actually said.”)

Roxas said that while he sympathized with Romualdez, who was also a victim of Supertyphoon “Yolanda”, it was not an excuse to “twist the truth.”

(“I don’t understand why he is saying that he was a victim of politics or they weren’t assisted by the national government.”)

Answering Romualdez’s claims during a Congressional hearing on Monday, Roxas said they did everything to help the typhoon-hit city.

There were rescue efforts, Roxas said, without elaborating.

He said they sent in 1,713 policemen, 3,375 soldiers, 118 firemen and 102 vehicles to help in the relief and rescue efforts. Distribution of relief goods is also ongoing, as well as the clean-up operations.

During the hearing, Romualdez said there were no rescue operations “up to today.”

“People were feeling frustrated seeing all these military planes and trucks, and there were dead people, and they were hearing the voices of survivors,” Romualdez said.

The official death toll in areas hit by the typhoon has now risen to almost 6,000. The Mayor said 60 to 80 bodies are still being recovered daily in Tacloban City alone.

But Roxas said they also had to prioritize the clearing of roads to reach isolated areas.

“Kalokohan yun (That is absurd),” he said in response to Romualdez assertion that the national government prioritized relief distribution over saving lives.

“Paano ka magsa-save ng lives hindi mo nga maabot yung tao…Ok ang priority to save lives. Bakit hindi nila ginawa? (How will you save lives if you cannot reach the person…Ok the priority is to save lives. Why didn’t they do it?” Roxas said during the interview.

But the Interior Secretary also said it was the local government who asked them to take over.

Romualdez earlier complained of Roxas’ insistence to “legalize” the operations, showing that the city had allowed and asked for the national government’s intervention.

“I told him: ‘Why is it illegal? As far as I know, the President is the President of the Philippines and he’s also the President of Tacloban City. I don’t see anywhere in the law that you need a letter, an ordinance from me for you to come in, and do what you’re doing,’” Romualdez said during Monday’s congressional hearing.

He said they wanted an ordinance as basis for their take-over. The local government promised to pass one but it never came. Nevertheless, Roxas said they were already helping.

(“Don’t say that we waited for a document before we extended assistance. We were already helping.”)

Roxas also said Romualdez quoting him saying, ““You have to be very careful because you are a Romualdez, and the President is an Aquino,” has been taken out of context.

Reading from a transcript, Roxas said the actual quote went as follows: “You have to understand you are a Romualdez and the President is an Aquino. He has to be very careful. The national government, we have to be very careful just taking over because the President does not want to be misconstrued na nang-aagaw ng kapangyarihan (as usurping power).”

Roxas pleaded for fairness, especially for the people they sent in to help the city.

He also called on the public, those who were in Tacloban to uphold the truth.

(“Let us not let those who want to revise history to prevail. The truth will always win.”)