newsinfo / CDN - News
CDN - News
TO PRAY, NOT TO DANCE 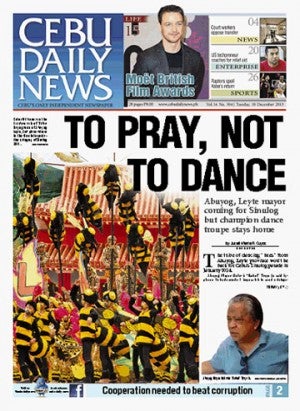 The tribe of dancing “bees” from Abuyog, Leyte province won’t be back for Cebu’s Sinulog parade in January 2014.

But the mayor said he would still come to Cebu in January for the Fiesta Señor with his family and staff.

Not to compete in the Sinulog dance contest but as pilgrims to offer thanksgiving to the Sto. Niño for his protection.

(We will come for the Fiesta Señor as thanksgiving because the storm damage was not that great. It was mostly property damage, not people.)

The town had only two deaths as a result of typhoon Yolanda, whose death toll nationwide reaches 5,924 dead and over 1,700 missing, with scores in unmarked graves still uncounted.

Abuyog’s dance contingent won second place in 2011 in the Free Interpretation category, with children dressed as bees and plants in a theme of good harvest as part of blessings of the Sto. Niño.

In 2009, the town’s dance troupe was the grand prize winner going home with P1 million cash, a trophy and the admiration of over a million spectators in the streets and Cebu City sports stadium.

Out-of-town contingents are much-awaited entries in the Sinulog grand parade and usually win the top prizes with their elaborate dance routines and costumes.

Typhoon Yolanda, whose path wreaked havoc in Eastern Visayas, is expected to sideline delegations from the area.

Officials of Alang-Alang town in Leyte earlier notified Cebu City organizers that they could not send a troupe to the Sinulog next year.

Alang-Alang is the defending champion of the free interpretation category.

Mayor Traya of Abuyog is a Sto. Niño devotee and views the Sinulog as more than a contest of merry-making.

He spent his 60th birthday in Cebu on January 14, 2010 to participate in the Sinulog as his way of giving thanks for blessings received in his life.

Traya arrived in Cebu on Sunday evening to meet friends who wanted to help rebuild his town with 63 barangays. He will be returning to Leyte today.

The mayor said they had started conceptualizing their presentation with a new choreographer, Frenil Palang, in October.

His team had planned to add “grasshoppers” to their cast of dancers, aside from their famous bees locally called “boyog”.

He said it was difficult to perform with young dancers worrying about the storm damage to their homes and families.

Every Sinulog festival, the mayor said, he would tell the dancers “dili ang pagdaog tuyo namo kundi ang paghalad sa Senyor”( Our main purpose is not to win the contest but to give tribute to the Holy Child).

The mayor attends every rehearsal. In each presentation, Tribu Abuyog makes it a point to include their trademark “Buyog” steps for one minute.

The “tribe” has 32 dancers from grade school, 64 from high school and 100 college students. Parents would accompany the younger dancers aged 8 to 12 during the out-of-town trip.

Most of the public gyms in 63 barangays where they were to rehearse were damaged by the typhoon, including costumes in storage.

The town’s presentation in the Sinulog is also a way to promote Abuyog tourism by showcasing trivia about their people and place, with its famous black sand beaches and delicacies.

But with the typhoon, even the production of their sweet chocolate-based rice delicacy called “moron” was affected. Banana leaves which are used to wrap the food are now scarce.

Abuyog has a population of about 59,000. Officials said out of 14,000 households 4,700 were destroyed while 8,000 were partially damaged aside from City Hall and other government structures.

“We need to fix the hotel and community college since this is income generating for Abuyog,” said the mayor.