How UP is coping post-‘Yolanda’ | Inquirer News
Close
menu
search

How UP is coping post-‘Yolanda’ 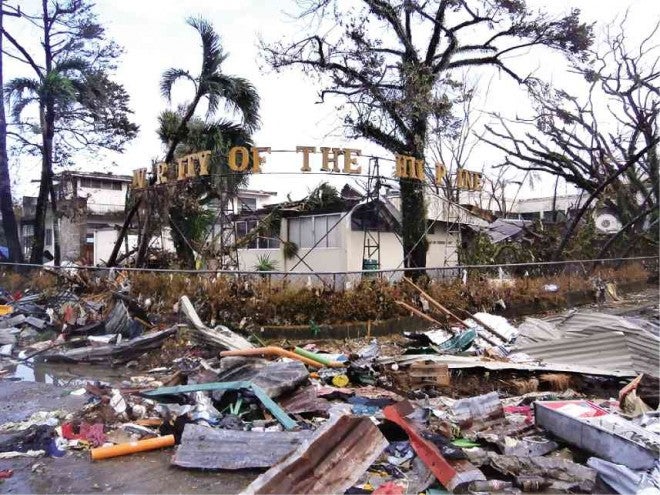 UP TACLOBAN even lost some letters of the sign at its main gate. PHOTO COURTESY OF THE UNIVERSITY OF THE PHILIPPINES

A woman walked into the Office of the Vice Chancellor for Student Affairs of the University of the Philippines Diliman (UPD) in Quezon City one afternoon last week.

She was carrying a large bag filled with sanitary napkin packs. In a hesitant voice, she told the clerk she heard “Yolanda” victims at the university needed the things she had brought. The donation was most welcome, the clerk assured the woman, who said she was an alumna.

As UP alumni are responding to the  call to help UP student victims of the supertyphoon that hit the Visayas early last month, the UP system itself is lending its expertise where it is needed.

While past disasters allowed the national university to be just an expert observer, Yolanda struck closer to home.

In addition to displacing students and staff, Yolanda severely damaged UP’s campus in Tacloban, like practically everything in the capital of Leyte province. UP Tacloban, said Prospero de Vera, vice president for public affairs, had over a thousand students, officials, faculty and support staff.

The satellite School of Health Sciences in nearby Palo town, which had about 200 students and staff members, was beyond repair, De Vera said.

UP Tacloban has one confirmed fatality so far—a third year political science student who drowned—but there are students still unaccounted for.

Many surviving but displaced students were transferred to various UP branches, even as far as Baguio City, De Vera said.

Cebu province, more accessible from Samar and Leyte provinces, got  the most number of transferees, straining the resources of the small campus.

Diliman, the beneficiary of the initial phase of an ongoing donation campaign of the UP Alumni Association (UPAA), received 273 cross enrollees from Tacloban and is helping 146 UPD students who lost their families, homes and sources of livelihood in Biliran, Samar and Leyte, said Ma. Corazon Jimenez-Tan, Diliman vice chancellor for student affairs.

All the survivors of Yolanda, she said, were also given a 100-percent tuition subsidy and a stipend of P12,000, or P2,400 per month for five months.

De Vera said they would also be reclassified under the Socialized Tuition and Financial Assistance Program (STFAP) so they would be paying lower rates.

All UP Tacloban students in Diliman are staying in the Acacia dormitory, which was actually not due for opening until next school year.

Other students who had lost their sources of financial support and were unable to pay for board and lodging were sent to other UPD dormitories, Tan said.

“We have subsidized breakfast, lunch and dinner for Yolanda [victims]… through the generosity of donors,” she said.

Tan said they had also set up a “one-stop shop for free” toiletries, hygiene kits, clothes, footwear and food.

“Counseling, group therapy and creative modes of healing [are also] being conducted in the dormitories and colleges,” she said.

Some donors, Tan said, were providing scholarships to students from UP Tacloban until graduation. Various colleges were extending assistance to their own students.

up.ovcsa) and other media to solicit donations for dormitory residents for at least six months.

Cebu gets most students

De Vera said UP Cebu dean Lisa Corro reported that 97 students of UP Tacloban had cross-registered there.

He said Corro learned that many more displaced Tacloban students would also transfer to Cebu.

Tacloban faculty members were allowed to stay for one week, free of charge, at  UP Cebu Executive House. Staff and union members could stay for a maximum of two days and one night, free of charge, but would be relocated to UP Cebu’s Union Building, Corro informed De Vera.

Meal assistance was being provided not just for Yolanda victims but for UP Cebu students from Bohol province, which was devastated by an earthquake just a few weeks before the typhoon.

The UP Cebu Cooperative was providing free lunch for one month.

As for accommodations, a real estate developer was setting up a prefabricated temporary dormitory for UP Tacloban students.

Corro also informed De Vera that this semester, UP Cebu and Tacloban students affected by Yolanda would be “rebracketed” or reclassified under STFAP so they would pay less.

De Vera said UP Los Baños had offered 124 places for students and could be providing accommodation as well. Like the other host campuses, it was also waiving tuition.

As for the employees in the affected campuses, De Vera said a team from UP Iloilo brought “bridging” cash as soon as it was safe to travel to Leyte. He added that, with automated teller machines working again, employees would be getting their salaries on time through the banks.

He also gave the assurance that staff members would get their monthly salaries, even if the campuses were closed, because they were regular employees.

As for the immediate task at hand of helping UP victims, UPAA is staging “Comic Relief” featuring Willie Nepomuceno on Dec. 14, 8 p.m., at Music Museum in Greenhills, San Juan City.

Tickets are available at the UPAA office, Ang Bahay ng Alumni, UP Diliman,

UPAA is also asking alumni and others to support a student by providing a living allowance of P5,000 a month, or P20,000 for four months.

Philippine Red Cross chair Richard Gordon has sent 650 relief packs for the residents. Lope Versoza of the Sigma Rho fraternity was providing transportation for the pickup and delivery of donations.

Gardenia has donated 350 loaves of bread.

Members of the Delta Lambda Sigma sorority and other alumni have pledged financial support for the students.