A gathering of hope and heroes 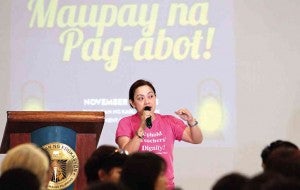 Public school teacher Teresa Valenzona of Tacloban City groped for words as she tried to recall the day Supertyphoon “Yolanda” battered her village of San Jose. Howling winds and surging waters sent her and her family of five scrambling to safety in a neighbor’s two-story house.

Valenzona is but one of the Department of Education’s (DepEd) more than 200 teachers and personnel who have fled their devastated villages for various reasons, mainly food and safety.

They were invited recently, along with their families, to a lunchtime get-together with Education Secretary Armin A. Luistro and his staff at the department’s Bulwagan ng Karunungan (Hall of Knowledge) in Pasig City.

“The water was rising too fast, so we knew our bungalow was no longer the safest place to be,” recalled Valenzona’s husband, Domingo. “Our neighbor’s two-story house was a blessing. We took shelter there and the whole family survived.”

But he could not stand the sight of arms waving for help in the rising water, so he took a hanging cable wire, tied it to a post and set out on a rescue mission with his brother. 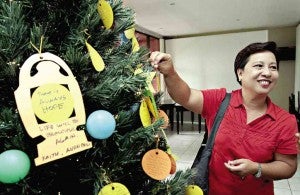 Emalyn Palaña hangs a message of hope on a Christmas tree

Holding on to the wire, the brothers swam through the current and reached out to the children and the elderly who had been trapped in their homes. “We were able to save six families, people we do not even know,” he said.

And then it hit Valenzona: Most of her students lived on the coast. Many of them must be drowning, crying out for help.

“God save them,” she muttered. She hoped that several others like Domingo were out in the storm, roping her students to safety. But at the back of her mind was the sad possibility that a number of her students would not make it.

Valenzona and her coteachers in the public schools of Leyte province will not know how many of their students survived the killing storm until they call the roll when classes resume. The death toll from the storm now stands at more than 5,000, according to the National Disaster Risk Reduction and Management Council. 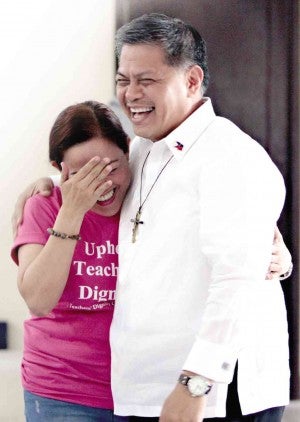 Luistro has ordered classes to be resumed in the ravaged areas at the soonest possible time as he believes that going back to school will help the students feel that things are slowly returning to normal.

If things went as planned, classes in Tacloban, one of the worst-hit areas, resumed yesterday, whether in the schools or in makeshift structures.

“We especially need to address the psychological trauma that the students are suffering from,” said Luistro, adding that the resumption of classes would also be a way to bring help to where it was needed.

“With the teachers gathering the children and checking attendance, the department will know who are missing, what they lack at home, what else they need,” said the secretary.

Right now, security is a top priority among Yolanda survivors.

“Criminals who fled from the city and provincial jails are now everywhere in Tacloban. There are stories of looting, rape and murder,” Domingo Valenzona said. He thought it wiser to get his family out of Leyte the first chance they got.

The Valenzonas are staying with relatives in Baguio City for the meantime.

Retired teacher Grecilda Setosea, 65, said they had nothing to eat anymore in La Paz, Leyte, so she had no choice but to join the people looting a warehouse for groceries. 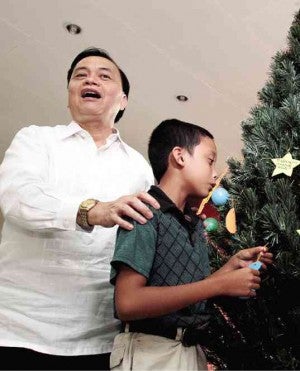 “I made sure to get milk for my grandchildren and noodles for the family,” she said. “It wasn’t easy. I had cuts and bruises. At least one person died in the stampede.”

Her sister, Leovil Taño, 55, could not hold back her tears as she recalled how Yolanda spared none of the things she had bought with her life savings. A coconut tree crushed  her house, destroying everything in it. All her copra, her source of additional income, was gone.

But the home economics teacher figured it was not the time to pine for the loss of worldly possessions. “My family is complete and we are all alive. I cannot be thankful enough,” she said.

At the program, where the survivors were invited to hang  messages of hope on the Christmas tree, Luistro repeated the “lipstick story.”

“You lost your slippers and everything but you didn’t forget your lipstick,” he recalled telling a teacher who had reported for work in mismatched slippers and a duster but managed to put on red lipstick. 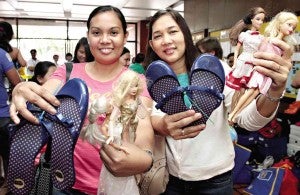 Melissa Baldota and Maria Fe Moreleta show off the new pairs of shoes and children’s toys they received.

“Brother, you see, if I come to school looking pale in a duster and with disheveled hair,” said the teacher, “what will my students think?”

That was when Luistro realized that teachers wear makeup after a catastrophe not because they were vain but because it gave their students the impression that it was “business as usual” and things were going to be all right.

Right there and then he knew they had to include beauty kits among the relief packs for the DepEd survivors.

True enough, the moment the makeup kits, courtesy of Avon Philippines, landed on the teachers’ tables, happy murmurs filled the room: “What shade did you get?” “I hope mine’s pink!”

Setosea giddily opened her swag and fished out the face powder and the lipstick. She flicked the compact open and swiped lipstick on like a pro. 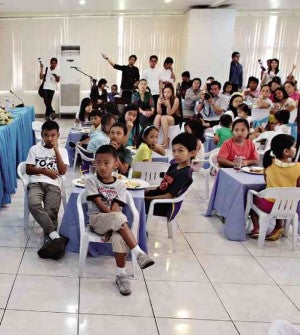 Young survivors of “Yolanda,” who are families of DepEd teachers and employees, at the gathering.

Arida said that during the recent Miss Universe pageant, which was held two days after the supertyphoon struck, she might have been in Russia physically but her mind was in the Philippines.

“I was competing in Miss Universe for all of you,” said Arida, who is no stranger to the DepEd family as her mom is a school principal and her dad used to be a public elementary school teacher.

That was a sweet thing to say to a group that needed the inspiration.  But though it will take a while for the Yolanda survivors to put together the shreds of their lives, there is no time to wallow in despair for the teachers among them. They vowed they would return home.

“We have to do it for our students, for the children of Tacloban [and other parts of Eastern Visayas] who will bring back the glow of [their wrecked towns],” said Cristina Gallano of Santo Niño SPED Center in Tacloban City.

Luistro said the department would be working on ways to help their lunch guests return home and rebuild their lives.

“We know that the DepEd should go beyond a two-week relief assistance and provide support that is genuine, long-term and concrete, and we will,” he said.