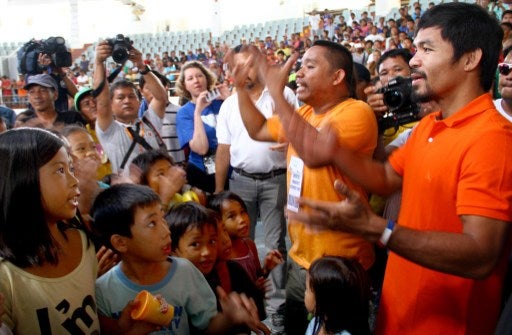 TACLOBAN CITY, Leyte, Philippines — Boxing champion Manny Pacquiao might not have given away relief goods or money when he visited this city but the residents here were not disappointed.

His mere presence was enough to give them temporary relief from their horrifying experience during Supertyphoon “Yolanda” (Haiyan), Nenita Badida, 64, said.

Badida’s comment could be a reflection of the reaction of the throng of people who shrieked and mobbed the boxing idol, the Sarangani representative.

Pacquiao arrived in Tacloban City to fulfill his promise to visit typhoon-hit areas after he won decisively against Brandon “Bambam” Rios on Nov. 24.

He visited several towns in Eastern Samar and Samar that were also hit by Yolanda before coming to Tacloban City Monday.

Employees and fans surrounded Pacquiao while reporters vied for his attention for an interview, delaying the start of the city government’s usual morning program.

After the singing of the national anthem, Pacquiao, who was asked by Mayor Romualdez to speak before the huge crowd, exhorted Taclobanons to never give up.

“Tindog Tacloban (Stand up Tacloban)! I know you can rise again just like me. I also fell down in the past but I persevered to stand and rise again,” he said in mixed Tagalog and Cebuano.

Pacquiao reminded the people to never forget God on their way to recovery from Yolanda, considered the strongest typhoon to hit the world this year.

“Don’t lose hope. As long as we are alive, there is still hope. We can manage to return to live normally just like before. Never forget our God. He will never leave us,” Pacquiao said.

From the City Hall, he motored to the Tacloban Astrodome, the temporary shelter for 1,464 individuals whose houses were destroyed by Yolanda. The boxing champion’s arrival was met by cheers and shrieks from some 7,000 people gathered outside and inside the astrodome.

Pacquiao went inside the Astrodome to meet with the evacuees but he did not distribute any relief items or money during his 30-minute visit.

“We don’t expect anything from him. His mere presence is more than enough for us to somehow forget that we are victims of Yolanda’s mad fury, Badida said.

Badida was with her grandchildren, Juan Diego and John Roger, hoping to get a glimpse of Pacquiao.

Badida lost her 41-year-old son Jose to Yolanda. Jose was on duty as a security guard of the regional office of the Bureau of Fisheries and Aquatic resources when their office was destroyed by Yolanda. His body was recovered three days after the typhoon.

“He (Pacquiao) is really a good man. He would not visit here to console us if he is not a good man; such a real person,” Badida said.

Couple Roland and Corita Ubal, both 35, said seeing their “idol” in flesh gave them a momentary respite from their woes brought about by Yolanda.

“At least, his visit makes us forget the calamity. Thank you for visiting us. We will never forget you Pacman,” Roland said.

Tristan Morillo, 23, also joined the thousands of people who waited for Pacquiao at the Astrodome, the main venue of Tacloban where all his fights have been shown, just like his Nov. 24 fight against Rios.

“He is an idol. This is a once in a lifetime experience. Sorry, but I have to leave my work briefly (just to see him),” Morilla said.

Morilla was among residents here who found short-term work under the cash-for-work programs of the Department of Social Welfare and Development and private organizations like the Taiwanese group, Tzu Chi Foundation.

From the Astrodome, Pacquiao went to Barangay Suhi where he offered a brief prayer for the 145 people who died during Yolanda. The 145 bodies, placed inside body bags, have been identified by their relatives.

Mayor Romualdez said the bodies would eventually be buried at a city-owned cemetery in Barangay (village) Basper.

Rosalinda Perez, a resident of Suhi, appealed to the city government to speed up the burying of the bodies. “We cannot stomach the foul smell emitting from these dead bodies. We cannot eat as we keep on vomiting,” she said.