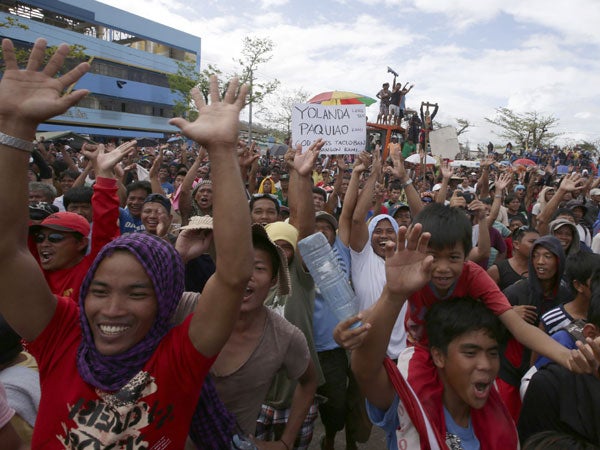 TACLOBAN CITY, Leyte, Philippines – For a moment, the ravages caused by “Supertyphoon Yolanda” (international name Haiyan) were forgotten by the people of this city as Manny Pacquiao battled his way into boxing supremacy again on Sunday.

For Rogelio Talisayon, 28, the victory of Pacquiao has somehow “lifted the burden” he and his family suffered due to Yolanda.

“I am happy that Pacquiao won his battle. Somehow, I forgot the miseries brought by Yolanda to our family,” Talisayon said.

Talisayon, his wife and three children were among the more than a thousand typhoon survivors of this city who watched the boxing fight of Pacquiao against Brandon “Bambam” Rios at the Tacloban Astrodome, one of the few structures in the city left standing after Yolanda slammed through the city on Nov. 8, packing over 200-kilometer-per-hour winds and causing a storm surge that destroyed everything on its path.

The Astrodome, now a refuge to hundreds of survivors, lost part of its ceiling but sustained only minor interior damage.

Survivors at the Astrodome roared in approval and clapped with glee when they heard Pacquiao dedicate his victory to the typhoon victims and make a promise to visit the areas affected by typhoon.

It did not matter that they watched the fight while squatting on the rain-soaked floor of the Astrodome. Some even carried Philippine flags, picked up from among the multitudes of debris that had covered the city, and waved them at various points of the staging of the fight.

The free viewing of the Pacquiao-Rios fight at the Astrodome was courtesy of the cable company Skycable in coordination with the city government here, the owner of the Astrodome.

Jaja Juares, head of the cable company here, said they decided to show the live telecast of the fight for free as their way of giving the typhoon-battered people of Tacloban a momentary relief.

“With him (Pacquiao) winning, I am sure our people here got some hope that there is a way out of the miseries they are experiencing,” Juarez said.

Skycable put up a giant white screen at the center of the Astrodome aside from two big television monitors and a small white screen placed on each corner, which enabled everyone – men, women and children – get a better view of the action-packed prized fight.

Talisayon, after watching the fight, returned to his temporary makeshift shelter within the premises of the 5,000-capacity Astrodome, which now served as home to more than 1,400 families who all lost their homes and material possessions to Yolanda.

“The fight is over and it’s back to reality,” Talisayon said, grinning.

Genaro Obera, 48, living in a makeshift home in Barangay 75, had no time to watch Pacquiao regain his prime position in the boxing world, as he was more concern with finding food.

“My wife and I have no food already. It’s been almost a week now since we received relief goods from the DSWD (Department of Social Welfare and Development). It’s good he won but our stomachs are empty. Food should be our priority now,” Obera said.

Obera lost his house and his sole source of income, an Internet shop, to Yolanda.

For the past few days, he said, he relied on the few biscuits and coffee that he admitted he had looted from one of the business establishments in Tacloban.

If he was lucky, Obera said he might get help from some relatives in Samar and the town of Alangalang in Leyte. “Otherwise, having a meal during this time is really a problem and a struggle for my wife and me,” he said.

Obera said their four young children were fortunately fetched by a relative and were brought to the latter’s home in Manila.

The children would have to stay away from this city until the situation in Tacloban normalizes and until he restores his livelihood, according to Obera.