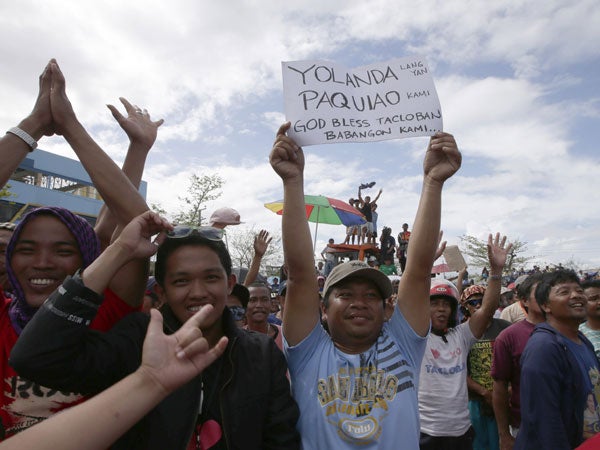 A typhoon survivor cheers with a placard following an announcement of Filipino boxer Manny Pacquiao’s unanimous win over American Brandon Rios in their WBO international welterweight boxing title match in Macau, which was telecast live at a public park in Tacloban city, Leyte province in central Philippines, Sunday, Nov. 24, 2013. AP

TACLOBAN, Philippines — Thousands of Filipino survivors of Typhoon Yolanda (international name Haiyan) erupted into wild cheers Sunday to celebrate their boxing icon Manny Pacquiao’s victory that gave them a brief respite from the enormous destruction and rebuilding that lies ahead.

“It felt like I got my house back,” said street sweeper Ardel Nebasa, who lost him home in tsunami-like storm surges that ravaged Tacloban city on Nov. 8.

Officials hope that watching Pacquiao’s triumph against American Brandon Rios in Macau would help traumatized survivors take their minds off the horrific devastation wrought by the typhoon and inspire them to pick up the pieces from the storm that killed more than 5,200 people.

“I was so happy and I wanted to cry but there were too many people,” said Nebasa, who watched the match with his son and thousands of others on a TV screen set up in a public plaza in Tacloban city.

He added, “It would have felt like another storm has hit if he lost.”

Another survivor waved a cardboard placard that read: “We’re for Pacquiao, God bless, Tacloban will rise again.” Many jumped repeatedly in joy.

Thousands of residents also cheered at Tacloban’s Astrodome stadium and watched the fight on a giant screen, their view partly obscured by the light filtering through holes in the basketball gym’s ceiling. One man carried a Philippine flag.

Pacquiao, who defeated Rios by unanimous decision to take the WBO international welterweight title, has dedicated his comeback fight to storm victims and promised to visit Tacloban and outlying regions that the storm had turned into a corpse-strewn wasteland.

When the bell rang to signal the end of the 12-round match, many spectators in Tacloban threw their baseball caps, shirts and pieces of cardboard into the air, even before the result was officially announced.

Tacloban city folk, Nebasa said, would gladly await the visit of Pacquiao, who rose from poverty to become one of the world’s highest-paid athletes.

“We’ll be thankful if he can help us,” Nebasa said. “He came from the ranks of the poor and we identify with him and are happy for his triumphs.”

In Macau, the 13,000-seat arena at the Venetian casino was packed. Many in the audience were Filipinos who either lived and worked in Macau or nearby Hong Kong, or made the one-hour flight from the Philippines.

Businessman Bong Ferrer flew to Macau with a group of 11 others.

“Of course this is a high morale day to the Filipino people because of what’s happening to us back in the Philippines. It’s redeeming to us. It makes us feel in high spirits,” he said.

Pacquiao is back, beats Rios in 12 rounds