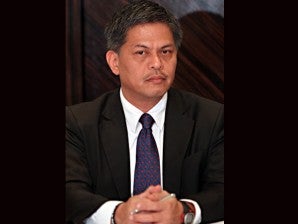 MANILA, Philippines — Did beauty queens hog the limelight at the Department of Education?

The head of the DepEd’s communications office claimed Binibining Pilipinas pageant organizers crashed into what was supposed to be a private meeting between Education Secretary Br Armin Luistro and some of the teachers who survived supertyphoon ‘‘Yolanda’’ (Haiyan) last Tuesday at the DepEd central office in Pasig City.

The organizers also let the Bb. Pilipinas title-holders led by Miss Universe third runner-up Ariella Arida steal the limelight by bringing in TV crews who showed the beauty queens distributing gifts to the teachers, gifts that were reportedly prepared by DepEd.

“They stole the story from us,” said DepEd communications unit director Patrick Salamat when asked why he kept other media outfits from covering the event.

He said Luistro originally ordered no media from the event. The DepEd communications unit director also claimed he did not know that Arida would show up.

“It was supposed to be a small, private event,” he said of Luistro’s meeting with some of the teachers who joined the exodus out of Yolanda-devastated Leyte and Samar and stayed in Metro Manila while seeking help from DepEd for their transfer.

Salamat said they did not expect so many teachers to show up, which reportedly reached about 250, some of whom brought their families with them.

“The Ms Universe people came in at the last minute with their own media. We did not expect so many participants. They almost ran out of food,” he said.

“And no, the distributed items did not come from them. They were from various DepEd donors,” added Salamat, who rued how the coverage of the event was focused on Arida’s visit rather than on DepEd’s efforts for the displaced teachers.

Arida, whose parents are public school officials, was shown on TV leading the gift-giving to the teachers.

During the meeting, Luistro reportedly urged the teachers to return to their places of origin and reopen schools as soon as possible.

Partial reports reaching DepEd showed 15 personnel were among the dead while 929 teachers were left homeless and 4,237 others suffered major damage to their homes.

Partial reports show that at least 5,297 classrooms need to be replaced, of which 2,217 are in the Eastern Visayas region. Of the 3,171 affected schools, about a third or 2,298 schools are also in Eastern Visayas.

Last June, Salamat also claimed he did not know about Arida’s courtesy call when reporters belatedly found out about it.