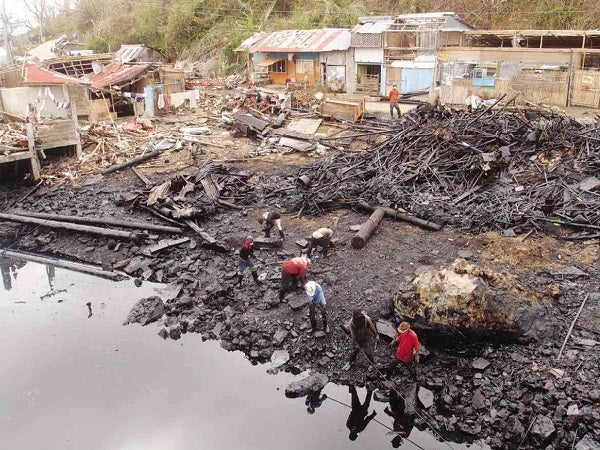 PART of the shoreline of Estancia, Iloilo, that was contaminated by oil spilling from a power barge that was detached from its moorings in the town, lifted off the water by Supertyphoon Yolanda’s 300 kph winds and slammed into communities. NESTOR P. BURGOS JR./INQUIRER VISAYAS

ILOILO CITY—A Church-based group helping victims of Supertyphoon “Yolanda” has scored the government for its “slow and inadequate” response to an oil spill in Estancia town in Iloilo.

“The people lost their homes already but their plight has worsened because of delayed and piecemeal action, especially of the national government,” said Fr. Marco Sulayao, coordinator of Task Force Buliganay sa Ngalan sang Gugma.

The group is composed of the Iglesia Filipina Independiente, Promotion of Church People’s Response and the United Church of Christ in the Philippines.

Sulayao said the National Power Corp. (Napocor) and other government agencies should have acted swiftly and decisively before the spill worsened.

“We could not stop ‘Yolanda’ and the collision of the barge. But the oil spill could have been contained and its effect on the residents minimized,” he said.

At least 446 families, or 1,892 persons, have been evacuated from Barangay (village) Botongon in Estancia since Nov. 23 due to an oil spill that has contaminated the village and five others in the neighboring town of Batad.

The evacuees are now staying in classrooms and tents at  Northern Iloilo Polytechnic College-West Campus about 2 kilometers from the oil-spill site.

Health officials had recommended the evacuation of at least 5,000 persons exposed to health risks from oil fumes that carry the toxic substance benzene.

The evacuation, however, has been delayed by the lack of shelters as schools and other structures had already been used for survivors of Yolanda.

The oil is leaking from the Napocor’s Power Barge 103 which winds of up to 300 kph detached from its moorings and slammed into the village’s rocky shores.

The Coast Guard estimated that at least 200,000 liters of bunker fuel had spilled but an initial report of the United Nations Disaster Assessment and Coordination Team placed the volume at 600,000 liters.

The 35-megawatt barge has a fuel storage capacity of 1.4 million liters.

“There was immediate action but it was insufficient because we were hampered by the communication breakdown,” Sta. Rita told the Inquirer.

Communication lines collapsed in Estancia, about 130 km northeast of Iloilo City, and other northern Iloilo towns when Yolanda struck.

Sta. Rita said action had been delayed also by a false report that the oil spill has been contained.

The Power Sector Assets and Liabilities Management Corp. (Psalm) has contracted the Kuan Yu Global Technologies Inc. to siphon off the remaining oil from the tanker and to refloat the barge and tow it away. The work would cost P87 million.

Cleanup efforts started on Nov. 8, the day Yolanda struck, with residents hired to do the work manually removing oil from the shore and other better equipped workers using machines.

The Napocor turned over a total of P2 million from Psalm to victims of the oil spill. Psalm will also donate mats, pillows and blankets to the evacuees.

Kuan Yu gave assurances that most of the oil would be removed by the end of the week while the coastal cleanup would be finished in three months. The barge would also be towed away by Dec. 6, according to Kuan Yu.