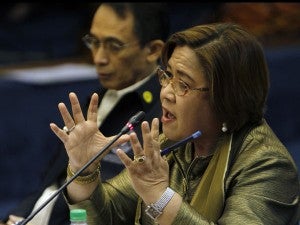 De Lima explained that it was their position because as far as the NBI is concerned, there is conspiracy in siphoning money from the Priority Development Assistance Fund (PDAF).

The NBI is the lead agency investigating the PDAF scam.

“What the NBI wants is to freeze all assets of those included in our complaints. But since AMLC (Anti-Money Laundering Council) has its own investigation, we leave it up to them to act,” the justice chief said.

The Court of Appeals already issued a freeze order on four lawmakers and chiefs of staffs of legislators implicated in the scam.