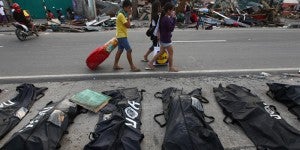 People cover their noses from the stench of dead bodies in an area affected by Typhoon Haiyan in Tacloban, Philippines, Wednesday, Nov. 13, 2013. Typhoon Haiyan, one of the strongest storms on record, slammed into six central Philippine islands on Friday, leaving a wide swath of destruction and thousands of people dead. AP FILE PHOTO

TACLOBAN CITY, Philippines—Three bodies were recovered from a collapsed house near a soft drinks plant here on Friday, raising hopes some missing victims of Supertyphoon “Yolanda” could still be found alive.

The Crime Laboratory of the Philippine National Police (PNP) said the three apparently died quite recently possibly due to illness and not as a direct result of the deadly storm surges that killed thousands of residents by the sea here on Nov. 8.

The report, however, also raised fears that the lack of medical facilities and the slow pace of relief operations could be taking an added toll on the devastated city.

The discovery of the three new fatalities was reported during the interagency meeting presided over by Interior Secretary Mar Roxas at the sports complex here.

“The three cadavers were newly dead, maybe just 24 hours when they were recovered,” said Senior Supt. Emmanuel Aranas of the PNP CrimeLab.

One of them had a big gash wound in his left leg. The other two were elderly men who might have died of cardiac arrest.

“But we cannot ascertain the real causes of death until we conduct autopsies on the bodies,” Aranas said.

Asked if the discovery of the three bodies was an indication that rescuers might still find survivors, Aranas said: “I don’t know.”

A member of an American volunteer rescue group reacted to news of the recovery by saying that it was a “very good sign” that some missing typhoon victims may still be alive beneath the rubble. The rescue worker recalled that survivors were pulled out alive from the ruins 22 days after a powerful magnitude-7.0 earthquake shook Haiti in 2010.

“I think this is a compelling reason for rescue workers to double their efforts in finding missing persons,” said the American rescue worker, who asked not to be named.

Roxas, however, admitted that looking for survivors under the rubble was not a priority of the government at the moment.

“I think the three who had just died were from recent causes. Maybe they had a heart attack, pneumonia or something, but not because of Yolanda,” Roxas said.

Read Next
Gov’t offices to shun parties
EDITORS' PICK
Vietnam’s ‘crazy guy’ aims to save ocean from waste
Marcos-era elections: Not what his son signed up for
WHO says no evidence healthy children, adolescents need COVID-19 boosters
Gear up and get ready to play with Yamaha Mio Gear
Acer starts the year off strong with the Aspire Vero National Geographic Edition
Over 3 Million worth of prizes to be won at Smart Padala’s SENDali Manalo Promo!
MOST READ
‘Sampal sa gobyerno:’ Drilon wants unvaxxed PAO chief barred from working
Vice mayor slams Vico Sotto for turning Pasig into a ‘puro palabas’ city
Guevarra to Acosta: Obey rules on unvaccinated
Guanzon denies Comelec delaying resolution of cases vs Marcos Jr. to favor any party
Don't miss out on the latest news and information.