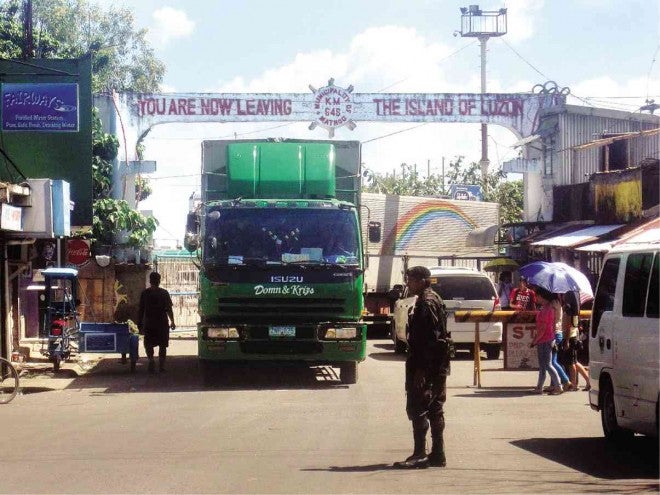 A cargo truck, one of hundreds of vehicles bound for Samar and Leyte provinces, prepares to board a ferry in Matnog, Sorsogon province, for the mercy trip to the Visayas on Friday. PHOTO FROM PNP INFORMATION OFFICE-BICOL

Port officials in Matnog town in Sorsogon province on Friday appealed to shipowners to deploy more vessels as a lack of ferries caused a traffic jam in which trucks carrying relief for typhoon victims were caught in a tailback that stretched for 6 kilometers from the Port of Matnog.

The gridlock here proved to be a kink in the US-backed rollout of relief for typhoon survivors a week after Supertyphoon “Yolanda” (international name: “Haiyan”) flattened central Philippines, killing thousands of people and leaving hundreds of thousands of others homeless.

Using US aircraft, aid workers reached typhoon-ravaged towns for the first time since Yolanda whipped across the region, easing criticism of the government for its slow response to the crisis.

Among the vehicles stuck in the lengthening tailback in Matnog was a bus from Metro Manila carrying relief for typhoon survivors in Balangiga town in Eastern Samar.

But the bus had gone through traffic snarls elsewhere before being halted by the congestion at Matnog.

“We were told that too many vehicles were headed toward Eastern Visayas, but there were few ferries making the crossing,” said Gemma Balmaceda, leader of a group of Metro Manilans who had come together through social media to bring aid to their families and friends in Balangiga.

The lack of ferries kept travelers waiting outside the port area along Maharlika Highway in Caloocan village for at least a day, Mendizabal said.

Hundreds of trucks carrying relief supplies and public buses bound for Samar and Leyte provinces were caught in the mammoth tie-up outside the port.

“The line is increasing by the day because of this extraordinary event. Imagine we only have four working ramps and eight vessels,” she said.

From the usual 2,500 passengers a day, the number of travelers increased to 6,500 a day since Yolanda struck.

“We need more vessels. We ask the private shipping companies to send more seacraft so we can accommodate our private clients and the government and nongovernment agencies on relief missions to Samar and Leyte,” Mendizabal said in an interview with the Inquirer.

With all airports in Samar and Leyte damaged by Yolanda, the Port of Matnog is the only gateway to the Visayas from Luzon.

On Friday, a long line of cargo trucks and 60 public buses from Metro Manila, including the bus carrying Balmaceda’s group, clogged the road leading to the port.

Among the cargo vehicles were 25 Army trucks carrying relief supplies, according to Maj. Angelo Guzman, military deputy information officer, who was aboard one of the trucks.

Travelers from Manila spend 12 hours by bus or car to reach the port at Matnog and 45 minutes to make the crossing to Allen.

Sumagaysay asked the shipping companies to dispatch more vessels to handle the relief traffic to Samar and Leyte.

Starlite Ferries, a private shipping company, said on Friday it had offered its vessels to the Philippine Red Cross to carry relief supplies and aid workers to Ormoc and Tacloban in Leyte and to Cebu province.

Starlite said it would deploy a ferry for one week on the Cebu-Tacloban-Ormoc route to deliver goods to Ormoc and to carry evacuees from Ormoc and Tacloban to Cebu.

The company said it would shoulder all maintenance expenses, including that for the crew and fuel, for the weeklong operation.

Sumagaysay said she had been personally supervising port operations since Saturday, when the port began 24-hour operations to allow relief supplies to go through.

She said she had ordered port employees to give top priority to cargo trucks carrying relief supplies to Samar and Leyte.

Sumagaysay said she had designated the port in Bulan town, also in Sorsogon province, as a holding area for incoming cargo trucks and public buses while waiting for the signal to board ferries at Matnog.

She said she planned to open the Bulan port to additional ferries to ease the congestion at Matnog.

The Department of Public Works and Highways (DPWH) said on Friday there were other routes that could be used for relief operations.

Public Works Secretary Rogelio Singson said that besides the Matnog-Allen route, relief supplies coming from Cebu could be carried on the Ormoc-Tacloban route.

Relief bound for Borongan and Guiuan in Eastern Samar could be carried on the Catbalogan-Guiuan route.

Singson said all national roads in Eastern Visayas had been opened. The DPWH was clearing secondary and city roads in Tacloban, he said.

The gridlock at Matnog angered travelers desperate to cross to the Visayas.

“We have medicines and food with us, too!” a woman shouted on seeing people from the Metropolitan Manila Development Authority (MMDA) on retrieval and relief missions to Guiuan and Basey in Eastern Samar and Palo, Leyte, asking port officials to put them on their priority list.

The woman said her grandfather and relatives in Tacloban were in dire need of food, water and medicine.

On the other side, Interior Secretary Mar Roxas supervised from Tacloban City the rollout of relief for typhoon-ravaged areas in the Visayas.

Riding on the air power of the US military, government teams involved in relief distribution finally reached coastal municipalities in the southern part of Eastern Samar.

Roxas said search and rescue helicopters of the aircraft carrier USS George Washington had been authorized to use the airport in Guiuan town as a hub for relief missions in Eastern Samar.

“We expect things to improve [every day]. Our work will continue. You yourselves can see that all available assets, resources and manpower of the government are being used,” Roxas told reporters.

Roxas flew to Guiuan to look at the situation in Eastern Samar on Friday afternoon. He also met Rear Adm. Mark Montgomery, commander of the US Navy’s Task Force 70.

Roxas said the airports in Borongan, also in Eastern Samar, and Ormoc City in Leyte would also be used as hubs to speed up aid missions.

Roxas, vice chair of the National Disaster Risk Reduction and Management Council (NDRRMC), admitted that the government had been having difficulties in delivering food, water and other donated goods to typhoon survivors due to logistical constraints.

He said only 11 trucks were available to deliver relief supplies to all towns in Leyte, some of which were located hundreds of kilometers away from Tacloban, the NDRRMC’s main hub.

“We admit that we cannot provide supplies to all areas equally and at the same time,” Roxas said.

At least seven more C-130 Hercules cargo planes of the US military arrived on Friday to ease the burden of the Philippines’ aging cargo planes.

The other countries were also sending planes and helicopters to beef up the air support for the relief operation, officials said.

Mother of all disasters

“If you want to make it fast, the government can open every airport in the Visayas then the [United Nations] and other entities can come in immediately,” Abdul Mutalis, of the private Putera Malaysia club, said.

“People are hungry. People need help,” he said, adding that the slow delivery of relief is prolonging the suffering of the typhoon survivors.

“We have to expedite [the delivery of aid] if we want to help them now. Action speaks louder than words,” he said.

For the last 20 years, Mutalis’ club has been responding to disasters, including the 2004 tsunami in Indonesia and the 2011 earthquake and tsunami in Japan.

“This is the mother of all disasters. There’s no word I can use right now (to describe this Philippine tragedy),” Mutalis said.

As of Friday, Malacañang said, aid had reached 23 towns from the Tacloban hub.

Deputy presidential spokesperson Abigail Valte said the government had also launched a food-for-work program for typhoon survivors (one food pack in exchange for three days of work) with an initial budget of P15 million.

Valte said Labor Secretary Rosalinda Baldoz was overseeing the program, which would involve the DPWH and the Department of Social Welfare and Development (DSWD).

For security in worst-hit Tacloban, Valte said the government had sent 800 police officers to support the 1,200 police and military forces already in the city to contain looting.

Answering questions about the death toll, which remains low by the government’s count, Valte denied the government was trying to conceal the actual number of deaths. With reports from Julie M. Aurelio, Gil C. Cabacungan and Tina G. Santos in Manila; Michael Lim Ubac in Cebu; and Mar S. Arguelles, Inquirer Southern Luzon

From now on, ‘Yolanda toll to come from ‘one voice’–NDRRMC