Relief efforts have intensified in areas hard hit by Supertyphoon “Yolanda” (international codename: Haiyan) as food, medicines, water and other supplies donated by the government and donor countries pour in for the victims. “Yolanda” barreled  through Visayas on Nov. 8, 2013, leaving over 3,000 dead as per records of the National Disaster Risk Reduction and Management Council (NDRRMC) and destroying people’s homes and means of livelihood. Video by INQUIRER.net’s Matikas Santos

TACLOBAN CITY —The distribution of food, water and medicine to typhoon survivors here picked up speed on Thursday after a barrage of criticisms from aid workers and the Philippine and international press forced the Aquino administration to bring order to its response to the calamity caused by Supertyphoon “Yolanda.”

But President Aquino, smarting from the international criticism over his slow response to Yolanda, appealed to the press for “greater accuracy in reports.”

His right-hand man for home affairs, Interior Secretary Mar Roxas, also dismissed as “ridiculous” observations in the Philippine and foreign press that the government was slow to respond to the disaster caused by Yolanda (international name: “Haiyan”).

“We can all do more, and today I would like to make an appeal for greater accuracy in reports,” the President said in a message read for him by Communications Secretary Herminio Coloma at a broadcasters’ meeting in Pampanga province.

The President gave the assurance that rescue, relief and rehabilitation operations are going on and “will go on for as long as necessary.”

“The Department of Public Works and Highways has been working nonstop to clear roads so help can sooner reach cut-off communities,” Aquino said.

“Most roads are now passable, and can be used to deliver relief,” he said. 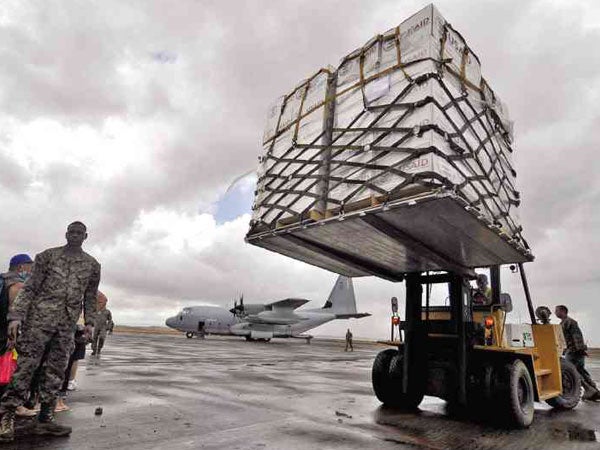 BIG LIFT US Marines unload relief items from a cargo plane at the Tacloban airport on Thursday. President Aquino was under growing pressure to speed up the distribution of food, water and medicine to desperate survivors of Supertyphoon “Yolanda.” RICHARD A. REYES

On Wednesday, five days after Yolanda roared across the Visayas, thousands of survivors in  heaviest-hit Leyte and Samar provinces still had to receive help from the government, which had been forced to send in special security forces to contain looting by hungry and homeless typhoon victims.

On Thursday, six days after Yolanda, bodies still littered the streets of Tacloban, a city of 220,000 people reduced to rubble by the typhoon.

Several communities, including some villages in this city, remain cut off from the outside world, as telecommunication is only partially restored.

Roxas, who flew here when the monster typhoon battered the Visayas on Nov. 8, acknowledged that many typhoon-ravaged areas have not received relief from the government due to logistical problems.

He, however, said the government was doing its best to respond to the needs of the survivors.

“It’s ridiculous,” he told the Inquirer when asked about the criticism in the press over the slow government response to survivors’ plea for help.

“Nobody is denying that many are still hungry,” he said. “In fact, that’s a no-brainer. Two months from now somebody will probably be still hungry. Are we happy? No. Are we content? No.”

Asked what was delaying the delivery of relief to survivors, he said it was the distribution system, referring to the difficulty of transporting aid caused by the heavy damage to the Tacloban airport and the roads that remained uncleared of storm debris.

Roxas said it was Defense Secretary Voltaire Gazmin, as chair of the National Disaster Risk Reduction and Management Council (NDRRMC), and he, as its vice chair.

He said the Department of Social Welfare and Development had been tasked with the repacking of donated relief goods for distribution to village officials, who in turn would distribute the aid to the survivors.

Asked about the system of delivery, Roxas said: “It’s according to need. That’s the only system.”

He added: “[T]here’s no other system because everybody needs it. There’s democracy and there’s no prioritization here.”

Roxas stressed that attending to the basic needs of a city with a population of more than 200,000 like Tacloban was a daunting job.

And he pointed out that even international disaster observation groups said Yolanda, the 24th typhoon to hit the country this year, was the most powerful typhoon on record.

“There’s no such thing as fast enough in a situation like this because of the [enormousness] of the task. You have to replace the entire social structure, including the business structure. We’re actually starting with a clean slate,” he said.

Roxas said C-130 military cargo planes were able to land in Tacloban a day after the typhoon and debris on major roads were cleared on the second day.

He said eight military 6×6 trucks had been sent to deliver rice to far-flung towns.

But Charmaine Cinco, who lives just 500 meters away from the sports complex that had been turned into a hub for the government response, said she and her family had yet to receive anything.

She said a village councilor in Barangay (village) 27 had told her that only 50 food packs were delivered to her community of 700 families.

“There’s none. What they’ve been doing is all hao shao,” Cinco said, meaning the government response was only for show.

And yet Coloma said all 140 towns in Leyte would get help by Thursday.

He could not say, however, whether survivors in other areas, such as Eastern Samar, Western Samar and Capiz province, would get adequate help.

“We accept their criticism,” he said, referring the flak the administration had been drawing for six days for slow and disorganized delivery of relief.

“We do not deny that there might have been some shortcomings, but these were the result of severe constraints. We did not intend not to give [other victims] proper attention,” he said at a briefing for reporters in Malacañang.

Despite the assurances of aid from higher-ups, the executive director of the NDRRMC could not swear on his word that help would finally reach all the survivors.

“Well, maybe, that’s too much. I will be held accountable if we say that every victim (will be given relief goods),” NDRRMC chief Eduardo del Rosario said.

“What we said was all areas, all municipalities will be given relief goods,” he said.

“Now, because of the magnitude of the problem, we are requesting the local governments, the mayors, barangay captains and their councilmen and their volunteer groups, including NGOs, to help us in the delivery,” he said.

Del Rosario did not say when aid would reach the survivors, saying only that supply lines would be stabilized by Friday or Saturday.

A Philippine Coast Guard vessel carrying 180 tons of relief goods was on its way to Tacloban on Thursday.

Cmdr. Armand Balilo, spokesman for the Coast Guard, said the BRP Corregidor was expected to reach Tacloban on Saturday.

President Aquino’s allies came to his defense on Thursday, with Senate President Franklin Drilon saying CNN was unfair in criticizing the government’s response to Yolanda despite its limited resources and dealing with a disaster bigger than the calamity caused by Hurricane “Katrina” in 2005.

“When Katrina struck in the US, there were also many complaints. Victims were also exposed to the elements for days,” Drilon said on radio dwIZ. “With their resources, they were not able to cope with the problems immediately.”

Iloilo Rep. Jerry Treñas said the people must unite and support the government.

“Minor shortcomings” could not be avoided given the magnitude of the devastation, Treñas said.

Former Albay Rep. Edcel Lagman said Yolanda’s strength was unparalleled and the preparations were no match for that power.

“Without being an apologist for the inadequacies of the government’s initial response in the aftermath of Supertyphoon Yolanda’s superfury, [I say] critics must understand that the unprecedented massive devastation and deaths upset the government’s preparation and experience in coping with disasters,” Lagman said.

The death toll from Yolanda stood at 2,357 on Thursday, a figure that aid workers expected to rise sharply.

In Tacloban, workers were concentrating on the retrieval of bodies, according to Lt. Col. Leo Madroñal, a spokesman for Task Group Yolanda.

He said soldiers had recovered 696 bodies, which were buried in a mass grave in Basper village, 14 kilometers from here.

Still, bodies littered the streets and remained buried under the rubble of collapsed buildings, and the stench posed risk to health.

Madroñal said 11 military trucks were arriving Thursday to join 21 other military vehicles being used in the retrieval of bodies. With reports from Norman Bordadora, Leila B. Salaverria and Jerry E. Esplanda in Manila; Joey A. Gabieta, Inquirer Visayas; and wires