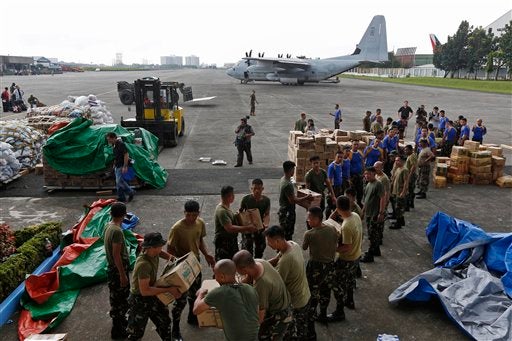 MANILA, Philippines—The Supreme Court and the National Prosecution Service (NPS) on Thursday joined the nationwide and global effort to help the survivors of monster typhoon “Yolanda.”

Associate Justice Jose Catral Mendoza whose wife Livia hails from Leyte has started a campaign for people to give bottled water, which will be given as aid.

High court justices, employees as well as court officials from other courts have pitched in to help.

“No money involved. As I understand it is simply a campaign for people to give bottled water which will be given as aid,” high court Information Chief Theodore Te said in a text message.

Originally, the help was intended for the DOJ employees and prosecutors affected by the typhoon. Prosecutor General Claro Arellano said the aid was given to the survivors regardless if they are from DOJ or not.

“Everyone there [in Leyte] needs help. We are sending another batch of aid in the typhoon affected areas,” Arellano said.

The NPS as well as the DOJ employees association are passing the hat to gather donations for the victims.

Justice Secretary Leila De Lima already went to Leyte to see the conditions of the DOJ employees and government prosecutors.

In Eastern Visayas alone, there are 150 government prosecutors.

Arellano said they are still struggling to account each prosecutor in the typhoon-affected areas.