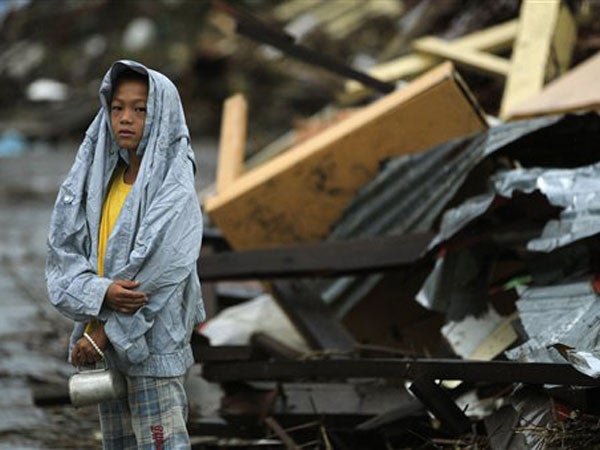 A young boy waits at the side of the road for fresh water surrounded by debris from Typhoon Haiyan in Tacloban, central Philippines, Tuesday, Nov. 12, 2013. AP FILE PHOTO

MANILA, Philippines — The Department of Labor and Employment has earmarked some P50 million for a program that will give temporary employment to displaced workers in Region VIII, which was recently devastated by “supertyphoon Yolanda” (international name Haiyan).

On the sidelines of the 3rd Philippine Manufacturers and Producers Summit on Thursday, Labor Secretary Rosalinda Baldoz said the amount, which would be tapped through the agency’s Emergency Employment and Integrated Livelihood Program, would be given out as salary to those who would be hired for temporary work, involving mostly rehabilitation efforts such as clearing out the debris, rebuilding critical infrastructure, among others.

Baldoz noted that they would like to start the temporary employment program at the soonest possible time.

Although the fund is readily available, the DOLE is still finalizing the number of displaced workers, identifying the potential beneficiaries, fixing up the DOLE regional office, which was completely destroyed, and accounting for their personnel, of which only a third has been accounted for as of Thursday, according to Baldoz.

Baldoz added that they would have to identify the bank branch through which they could course the P50 million, and coordinate with the local government units in the affected areas. The LGUs will also be the ones to identify the work needed, the jobs that can be deployed, and who can avail of these jobs, according to Baldoz.

There are also plans to hold job fairs later on to assist the displaced workers to get permanent employment.

Baldoz said DOLE could add more funds for the temporary employment program, if needed. These additional funds may be taken from the agency’s yearly budget.

The DOLE chief disclosed that they have been advised to prepare the list of projects and their respective budget allocations so that the agency could readily roll out the funds as early as January 2014.

Under the P2.268-trillion national budget for 2014, which was approved on the second reading by the House of Representatives, the DOLE and Technical Education and Skills Development Authority (Tesda) will receive P3.69 billion for employment and training assistance.

Baldoz noted that half of that, which would be DOLE’s budget, could be used for livelihood programs.