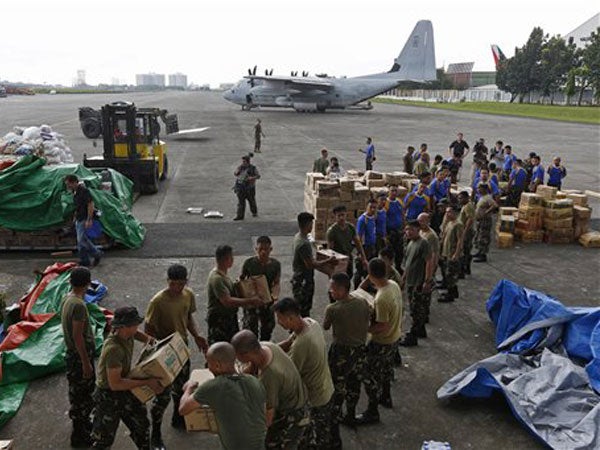 MANILA, Philippines — The Philippine Coast Guard search-and-rescue vessel BRP Corregidor, loaded with 180 tons of relief goods, is on its way to Tacloban City, according to the PCG spokesperson.

“Aside from relief goods, the Corregidor is also carrying six life boats that would allow Coast Guard personnel to distribute the much-needed items in coastal communities in Leyte and Samar,” he told the Philippine Daily Inquirer

“After dropping off relief goods in Coron town (in northern Palawan), the Romblon had left for the municipality of El Nico with a cargo of food items and medicines,” said Balilo.

The Edsa “arrived this morning in Cebu City with 385 civilians, all typhoon victims from Tacloban,” he added.

Meanwhile, the Coast Guard Action Center reported that at least nine persons died in six maritime accidents in northern Palawan last weekend during the onslaught of the supertyphoon.

“Two fishing boats, the Lea Andrea and Cheska 2, and the passenger boat Adrian sank while three other vessels, including the tanker Alvin, ran aground in separate locations off Busuanga island,” it said.

Among the fatalities were Carlito Arcamo, skipper of the Lea Andrea; Ronnie Manobo, Nonito Francisco and Elmer Prando, all passengers of the Adrian; and Leonardo Sapalicio, crew member of the Cheska 2.

In Eastern Samar, two crew members of the MV Andrea Princess were killed while four other crew of the cargo vessel were reported missing after the ship listed and ran aground in Borongan town last Saturday.

The fatalities were identified as Romulo Albios and Alexander Stalio, the ship’s chief mate and crane operator, respectively.

The missing crew members are Cesar Bogo, Ian Dasas, Ricky Neil Galegao and Reuben Quesada. Fifteen other crew of the ship are undergoing medical treatment in an undisclosed hospital in the Eastern Visayas capital.

The Andrea Princess was “taking shelter near Ando island in Borongan when it was battered by huge waves, causing it to list and run aground,” according to the PCG.