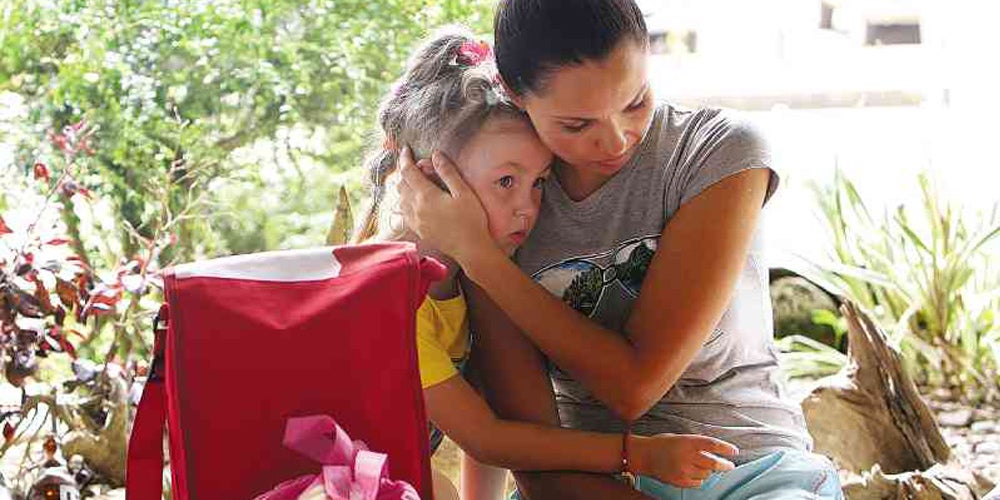 RUSSIAN VISITORS. A Russian mother comforts her daughter as they wait for a flight to Manila at the Busuanga airport in Coron, Palawan province. MARIANNE BERMUDEZ

CORON, Palawan—Stranded for days, tourists scrambled to fly out of this famed diving and snorkeling haven, lest they get caught in another storm.

As soon as the domestic airport here resumed operations on Monday, hundreds of tourists—foreign and local—made a beeline for the terminal for a flight to Manila and elsewhere.

More than half of the estimated 444 tourists took the first available flight out of Coron, said Mayor Clara Reyes.

“We’ve been coming here since Friday, and they would say go back, and wait for advice,” Russian Kovalenko Vladimir said while waiting for a flight to Cebu on Tuesday.

Vladimir, who flew to Coron with his extended family of 11 on Oct. 28, said they were booked for a flight out of Coron on Friday.

All the flights were canceled that day as Supertyphoon “Yolanda” barreled across the Visayas before swirling out into the West Philippine Sea, leaving in its wake a high death toll and massive destruction.

English Nicholas Dean and Stephanie Hasset, slouched on the floor of the terminal’s predeparture area, said they had been waiting for a flight back to Manila since Friday.

Dean, 31, a construction consultant, and Hassett, 32, said they had to move out from their “guesthouse” after a tree crashed on it. They had earlier moved from another guesthouse on stilts amid fears of storm surge.

“We haven’t seen anything like this. Not in our lifetime. We’re from England and we don’t have typhoons there,” Dean said.

Coron draws an average of 100,000 tourists every year, raking in a conservative P1 billion, local officials said. Divers around the world are drawn to the World War II shipwrecks underwater, while locals prefer to go island-hopping.

Yolanda’s fury, however, has left a deep impact on the tourists.

“We had to cover windows with pillows because of the strong winds. We covered our kids with blankets. We didn’t sleep all night,” said Vladimir, a 37-year-old businessman from Vladivostok. “It was scary.”

Vladimir and his family stayed at Koko’s Nuss, which was in shambles.

“It was fiercer than the hurricane we encountered in Fiji last winter,” he said.

It was the Vladimirs’ second trip to Coron in five years. But given the huge damage left by the supertyphoon, Vladimir said they have no plans of flying back soon.

“It needs more time for recovery,” he said. “It was beautiful then, but not now.”

Mayor Reyes agreed that it may take time before the industry could fully recover. But she acknowledged that businesses have the capability to get back on their feet on their own.

She has called a meeting of all the stakeholders to assess the damage and draw up measures to restore tourism to its old vibrant self.

“We can’t let this halt the local tourism industry,” she said.

At least 11 people, including a 69-year-old Dutch diver, died in Yolanda’s deadly onslaught in Coron. Like the other affected areas, food was a major problem. The municipality’s 45,000 people have only two days’ supply of rice.

“We were isolated,” Reyes said in an interview inside the sweltering Coron coliseum behind the municipal hall where she supervised relief operations.

She said the National Food Authority in Coron had only 200 sacks of rice left. It didn’t help that 980 of the 1,000 registered fishing boats were damaged.

“That’s why we’re appealing to the media outlets. There’s so much attention on the Visayan region. Of course, they need more. But we hope they will not forget other areas hit by the storm, especially Coron. It’s really hard in Coron; we were totally isolated,” Reyes said.

There are 12,000 people in evacuation centers in the 23 barangays (villages).

To deal with the dwindling food provisions, Reyes said she planned to set up soup kitchens, distributing porridge mixed with noodles twice a day.

Sensing their boredom in the aftermath of the storm, Reyes said she had asked tourists to help pack relief goods that came from local businessmen. “Now there’s nothing to pack,” she said.

To prevent prices from spiraling, she said the local government would purchase all the rice, sugar and coffee, and other basic commodities and sell them at the right price.

Since power was down, the municipal government and the rest of the business establishments were relying on generators. It may take two months before the power lines are rebuilt and become operational in the town proper.

Four days after the storm, the town proper was now bustling with activity; the public market, retail stores, souvenir shops and hotels were open for business. The debris from fallen trees is slowly being cleared off the streets.

But the scars remain. From the air, one could see streaks of brown—fallen trees whose leaves have turned brown—across the face of the island’s otherwise green mountains.

Getting off the airplane, the first thing a tourist would see is the blown-off roof of the old terminal of the domestic airport, and then the missing glass walls that had been shattered by Yolanda.

The winding road to and from the airport in the middle of a vast expanse of green remains littered with fallen trees and a stalled jeepney that turned on its side because of the strong winds.