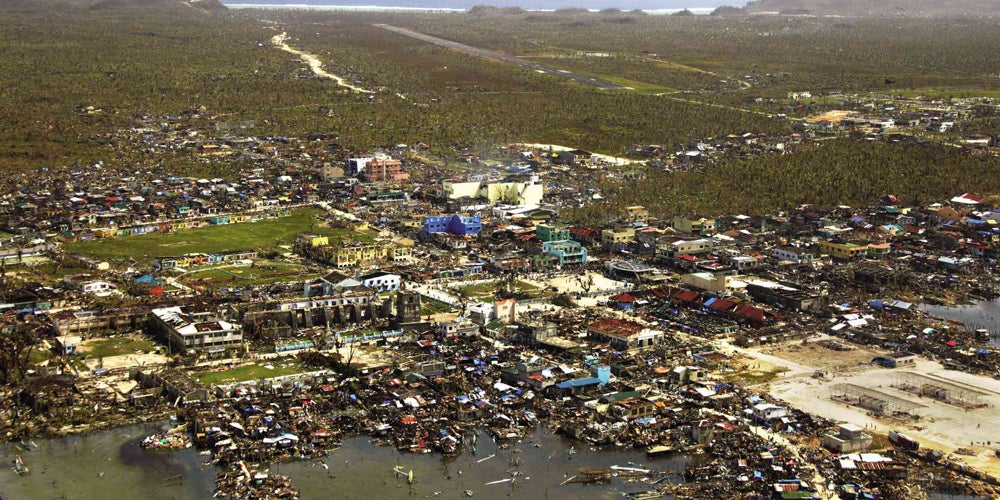 RUINS WHERE ‘YOLANDA’ MADE FIRST LANDFALL. The historic Church of the Immaculate Conception (roofless rectangle building with bell tower) in Guiuan, Samar province, lies in ruins like most structures in the town of Eastern Samar. Hailed as a National Cultural Treasure by the National Museum, the church was built by the Jesuits in the early 18th century. JOHN CHUA/INQUIRER CORRESPONDENT

GUIUAN, Eastern Samar—This fishing town where one of the strongest typhoons ever recorded made the first of a series of landfalls in the Visayas has been turned into a terrifying wasteland where armed men threaten to kill fellow survivors for food.

Guiuan, known for its beautiful beaches and rich colonial history, was where Supertyphoon “Yolanda” (international name: “Haiyan”) roared in from the Pacific Ocean with winds of 315 kilometers an hour on Friday. Its fate remained unknown until Monday when soldiers and journalists arrived for a brief visit by helicopter.

“It is terrifying here,” a frightened resident told an Agence France-Presse (AFP) journalist as he stood amid the carnage of the town at the southern tip of Samar Island that a week ago was a bustling community of 47,000 people.

“There are armed thieves going about. If they know that you have food stored away, they will force their way into your house and rob you at gunpoint.”

Other residents warned of pistol-wielding men seeking not money but rice—a valuable commodity as the town’s food supplies dwindle.

At a warehouse—one of the few structures still standing—a crowd eagerly looted its contents, not just for food but for anything they could get their hands on: clothes, toys, trinkets, household goods.

“We’re helpless here. We are so few and they are so many,” a policeman said. He was one of just a few of the 35 policemen who had shown up for work after the typhoon.

Like in other devastated towns on Samar and neighboring islands, where more than 10,000 people were feared dead, police were victims, too. They were either dead, too traumatized to turn up for work or too preoccupied with trying to ensure their loved ones survived the gruesome typhoon aftermath.

Yolanda knocked out Guiuan’s water and telecommunications services and toppled trees and electrical posts, blocking routes to the town and any hopes of desperately needed food and medicines being delivered.

Large buildings and even a sports stadium were flattened, while from the air the remnants of dozens of flimsy homes built along the coast looked like piles of splintered wood.

The roof of Guiuan’s church, which dates back to the 1700s, had been blown off, eliminating another slice of history for a town known as the site where Portuguese explorer Ferdinand Magellan arrived in 1521.

General MacArthur, Balangkayan, Hernani, Salcedo and other southern towns were also badly beaten by Yolanda, according to a counselor of Ateneo de Manila, who was with 12 others in a team of mostly former seminarians from the Borongan Diocese that reached the areas.

Carlo Carlon, a native of MacArthur town, told the Inquirer in a satellite phone interview in his hometown that his group was gathering fresh information in the hard-to-reach areas and relay these to Manila so relief operations may be extended.

Hernani and Balangiga seemed to have been “hit by an atomic bomb,” he said.

The villages of Carmen, Batang and Garawon in Hernani were “wiped out from the map,” he added.

At least 65 people died in Hernani and were buried in a mass grave in the municipal public cemetery, Carlon said.

The residents were getting agitated by the scarce food supply, he said. “They need food, rice, and there should be security to maintain peace and order.”

In Manila, Transportation Secretary Joseph Abaya said the Philippine Air Force was securing an airfield in Guiuan for the landing of relief supplies by C-130 planes.

The main cause of the devastation in Guiuan was the strong winds, a ragged man told the French news agency AFP, and not tsunami-like waves that destroyed many other towns.

He estimated that the death toll there was relatively small. “Less than a hundred,” he said.

But like elsewhere it seemed certain that it would be a long time before the true number of the dead in Guiuan is determined, if ever.

“There were a few dead bodies there. And some more over there,” another man said casually as he pointed at different pieces of debris.

“There may have been around 50 dead, but we buried them already.”—With reports from AFP; Connie E. Fernandez, Inquirer Visayas; and Miguel R. Camus in Manila