TACLOBAN CITY, Philippines— Thousands of typhoon survivors swarmed the airport here on Tuesday seeking a flight out, but only a few hundred made it, leaving behind a shattered, rain-lashed city short of food and water and littered with countless bodies.

Four days after the typhoon struck, only a trickle of assistance has made it to affected communities along the eastern seaboard, which bore the brunt of Supertyphoon “Yolanda” (international name: Haiyan). Authorities estimate it killed 10,000 or more. Millions are without shelter or food.

Tacloban, a city of about 400,000 people on Leyte island, is among the hardest hit.

Two Philippine Air Force C-130s arrived at its destroyed airport just after dawn, along with several commercial and private flights.

The planes were greeted by scenes of chaos as more than 3,000 people who camped out at the building surged onto the tarmac past a broken iron fence to get on the aircraft. Just a dozen soldiers and several police held them back.

Mothers raised their babies high above their heads in the rain, in hopes of being prioritized. One lady in her thirties lay on a stretcher, shaking uncontrollably. Only a small number managed to board.

“I was pleading with the soldiers. I was kneeling and begging because I have diabetes,” said Helen Cordial, whose house was destroyed in the storm. “Do they want me to die in this airport? They are stone hearted.”

Most residents spent Monday night under pouring rain wherever they could — in the ruins of destroyed houses, in the open along roadsides and shredded trees. Some slept under tents brought in by the government or relief groups. 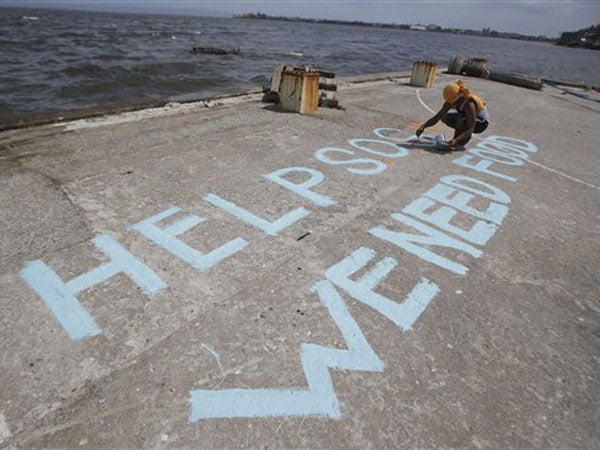 A survivor writes a message on their port to call for help at typhoon-ravaged Tacloban city, Leyte province central Philippines on Monday, Nov. 11, 2013. Authorities said at least 2 million people in 41 provinces had been affected by Friday’s disaster and at least 23,000 houses had been damaged or destroyed. AP

Local doctors said they were desperate for medicines. Beside the ruined airport tower, at a small makeshift clinic with shattered windows an, army and air force medics said they had treated around 1,000 people since the typhoon for cuts, bruises, lacerations, deep wounds.

“It’s overwhelming,” said Air force Captain Antonio Tamayo. “We need more medicine. We cannot give anti-tetanus vaccine shots because we have none.”

International aid groups and militaries are rushing assistance to the region, but little has arrived yet.

The USS George Washington was expected to arrive off the coast in about two days, according to the Pentagon. A similar sized US ship, and its fleet of helicopters capable of dropping tons of water daily and evacuating wounded, was credited with saving scores of lives after the 2004 Asian tsunami.