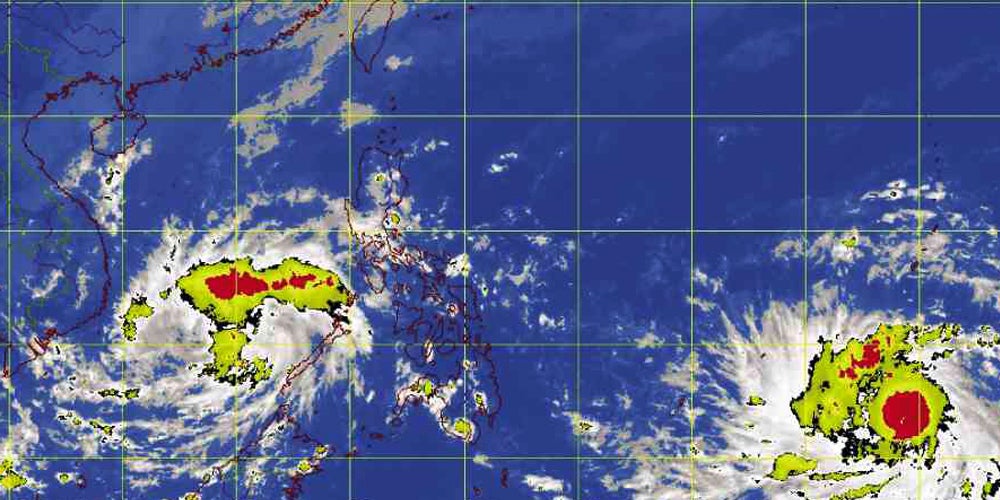 SUPERSTORM COMING. Tropical Storm “Haiyan,” which is expected to strengthen in 48 hours into a supertyphoon with peak intensity of 241 kilometers per hour, is forecast to make landfall in the Samar-Leyte area by Friday afternoon. It will be named “Yolanda” when it enters the Philippine area of responsibility. DOST-PAGASA MAP

Tropical Storm “Haiyan” will likely turn into a supertyphoon as it enters the Philippine area of responsibility in the next 48 hours, US meteorologists said on Tuesday.

“Due to very favorable environmental conditions, rapid intensification is forecast over the next 48 hours with a peak intensity of 130 knots (241 kilometers per hour),” said a forecast by the Hawaii-based Joint Typhoon Warning Center (JTWC).

The JTWC of the US Department of Defense categorizes storms with wind speeds of 241 kph as a supertyphoon. The Philippine Atmospheric, Geophysical and Astronomical Services Administration (Pagasa) officially uses no such classification.

Haiyan, which will be named “Yolanda” when it enters the Philippine area of responsibility, is expected to arrive on Thursday morning and make landfall in the Samar-Leyte area by Friday afternoon, Pagasa said.

It will have turned into a typhoon once it comes in, moving westward at 25 kph, weather forecasting section chief Rene Paciente said.

“It will cut through Visayas and exit through Mindoro. If it maintains its westward track, it has a low chance of hitting Metro Manila. But it may also go west-northwest,” he said.

It “will then weaken as it tracks across the Philippine islands but should emerge over the South China Sea at near 115 knot intensity (214 kph).

Pagasa uses a different method in calculating wind speeds and its numbers tend to be more conservative than the JTWC’s.

The disaster councils in Eastern and Central Visayas are being activated to prepare for Yolanda.

“We have issued advisories to all local disaster risk reduction management councils across the region that we aim for zero casualty and preemptive evacuation must be done if necessary,” said OCD 7 admin officer Flor Gaviola.

Gaviola said people living on riverbanks, and in landslide-and flood-prone areas would be monitored.

Alternative evacuation centers, such as schools, gymnasiums or multipurpose halls must be identified, she said.

In case these were damaged by the recent 7-magnitude quake, local and disaster officials must find another venue like the basketball court, according to Gaviola.

In Mandaue City, Mayor Jonas Cortes activated the five clusters of 27 barangays (villages), with each head tasked with disseminating  information to the public about the incoming typhoon.

“If in case Yolanda makes landfall in the region, the people should seek temporary shelter in a sturdy building or on high ground,” said Rey Gozon, the regional director of the OCD and chair of the Regional Disaster Risk Reduction and Management Council.

Gozon appealed to fishermen not to venture to the open seas during this time to avoid getting lost or, worse, getting killed.

On alert in Bicol

Most local disaster officials in Bicol on Tuesday went on alert as they brace for Yolanda.

In Albay province, Gov. Joey Salceda, in a text message, declared Albay in a “state of heightened alert and close monitoring.”

He said the advisory was “in view of prevailing models of the weather system” which might greatly affect the province.

In Catanduanes province, Ramil Soliveres, public information officer of the provincial government, in a phone interview, said the local government had “pre-positioned” plans and rescue forces.

He said the province initially bought 100 bags of rice before noon on Tuesday so it could have available stock of relief items for towns difficult to reach in case of landslides.

In Masbate province, Gov. Rizalina Seachon-Lanete, in a phone interview, said she was meeting with the Provincial Disaster Risk Reduction and Management Council (PDRRMC).

Dennis Fernandez, officer in charge of Research and Planning Department of the Masbate PDRRMC, said the council was closely coordinating with the Department of Social Welfare and Development to ensure there would be relief stocks in evacuation centers.

Other local officials like Mayor Alexis San Luis of Pili, Camarines Sur province, in a message over Facebook, appealed for prayers and cooperation from netizens.

He said Yolanda might cause waters to rise from Bicol River, which traverses the coastal areas of Camarines Sur.

As for the weather disturbance formerly known as “Wilma,” which has turned into a low-pressure area, it was some 160 kilometers northeast of Puerto Princesa City as of Tuesday morning, Pagasa said.

But it may still strengthen once over the West Philippine Sea, Pagasa said.

Based on Pagasa’s 24-hour outlook, Mimaropa (Mindoro, Marinduque, Romblon and Palawan) will experience cloudy skies with moderate to occasionally heavy rains and thunderstorms, which may trigger flash floods and landslides.

Western Visayas and Bicol province will have cloudy skies with light to moderate rain showers and thunderstorms, it said.

“Metro Manila and the rest of the country will be partly cloudy to cloudy with isolated rain showers or thunderstorms,” Pagasa said.

Moderate to strong winds blowing from the northeast will prevail over Luzon and Western Visayas and the coastal waters along these areas will be moderate to rough.