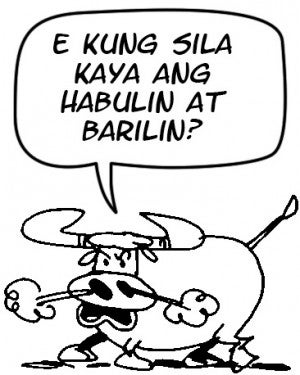 Gina Mapua, president of the Wild Bird Club of the Philippines (WBCP), said she believed the Singsons were shooting endangered species.

“Hunting is illegal in this country,” she told the Inquirer on the telephone on Tuesday.

An official of the Ilocos regional office of the Department of Environment and Natural Resources (DENR) said Singson had not been sanctioned for violating any wildlife law so far.

The DENR had allowed the former governor to import and take care of endangered species in his zoo at the Baluarte compound in Vigan City, said Samuel Peñafiel, DENR Ilocos director, in a telephone interview on Tuesday.

The Inquirer tried but failed to reach Singson since Monday.

Singson and his daughter were shown holding dead ducks in two of four photographs uploaded through Michael’s Instagram account last month. The pictures, however, were removed from the account on Nov. 4.

Another photograph shows at least 10 dead ducks lined up in front of Michael and an unidentified companion. Another picture shows Singson’s daughter aiming a rifle.

“While the club desperately promotes bird-watching to raise the need for environmental conservation, some of our countrymen spend family-bonding time killing birds. Hunting, poaching and even mere possession of wildlife are illegal in the Philippines. In the daang matuwid administration, why are some people—I was told he is a governor—still above the law?”

The Instagram account identified the site as Ilocos Sur, but Peñafiel said he had no record of swamplands in Singson’s province that were uninhabited and suited for hunting ducks.

In an April 22 story in the Inquirer, Singson said he was into hunting to retain his vitality. He said he shot wild ducks in Ilocos Sur and traveled to other hunting grounds in Mindoro, Pampanga, Sweden, Australia and South Africa.

Mapua said the club did not want Singson jailed, although that was a penalty cited in Republic Act No. 9147, the Wildlife Resources Conservation and Protection Act.

Mapua said the club wanted “to draw attention to them [the Singsons],” hoping to convince them to “please consider conservation for our future generations.”

The Philippines has 673 bird species, which have been documented by the global wildlife conservation community, she said, adding that about 10,000 wild ducks remain in the country.

Peñafiel said Singson had been busy processing an application to bring in more animals to Baluarte.

He said three months ago, the DENR Ilocos office endorsed Singson’s application to import an animal from South Africa. But he said his office had not been informed yet if the government had granted the request.