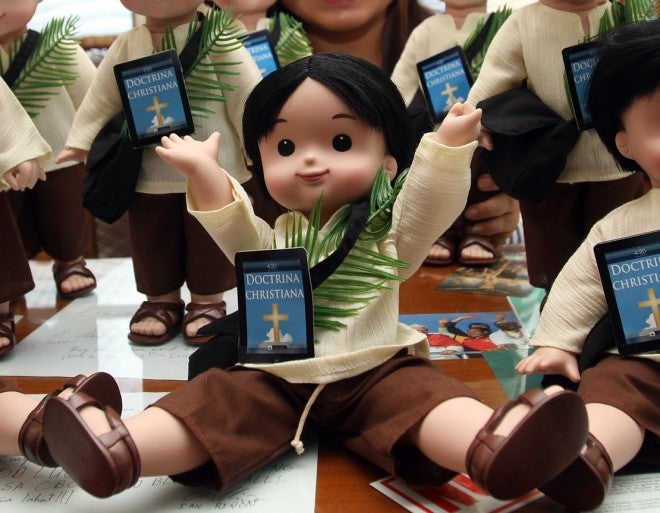 Emely Lingat, 20-year-old, a staff of the New Media committee of the National Commission for Calungsod canonization shows some of their Pedrito dolls in honor to patrron Saint Pedro Calungsod. Some priests suggest that instead of robots, Pedrito dolls is a perfect gift for children this hristmas. The doll is worth 650php at CBCP. INQUIRER PHOTO/JOAN BONDOC

The Catholic group YouthPinoy has relaunched Pedrito, the Calungsod doll, to raise funds for the restoration of the churches damaged by the 7.2-magnitude earthquake that hit Bohol and Cebu provinces as well as to help bring the calamity victims’ lives back to normal.

For every Pedrito doll sold, P100 will be donated to Church-led relief and restoration operations in Bohol and Cebu.

Each doll still costs P650, the same price at which it was sold a year ago for the October 21 canonization of Pedro Calungsod. 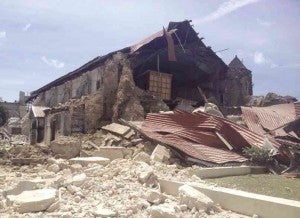 According to YouthPinoy officer in charge April Frances Ortigas, it is just fitting for Calungsod, considered a native son of the Visayas, to “help” in the restoration of the Church in his hometown after the loss of lives and properties, including that of centuries-old churches, due to the powerful earthquake.

“We are relaunching the Pedrito dolls, with the proceeds of the sale to go to the victims of the earthquake in Cebu and Bohol. We in YouthPinoy believe that St. Pedro Calungsod is telling us to help his kababayan rebuild the Church there, by which we mean not only the structures but the hearts of the people and their faith in God,” Ortigas said in a statement.

She added that the Pedrito dolls would also remind Filipinos that they could be “little saints” themselves by helping the needy, especially those who are displaced and left homeless by the calamity.

“We can be little saints in our own ways. Through these Pedrito dolls, we are helping propagate the life and example of St. Pedro and also helping rebuild the Church in the Visayas,” Ortigas said.

The 15-inch Pedrito doll, conceptualized by the New Media Committee under the National Commission of the Canonization of Pedro Calungsod, was brought to Rome as a way of sharing updates about Calungsod’s sainthood.

The “traveling and embraceable” image of the martyr has already been to the Vatican City during the canonization of Calungsod and to Rio de Janeiro for the recent World Youth Day in Brazil. 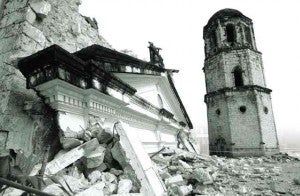 LOAY CHURCH (BOHOL) The Church of Santisima Trinidad was built in 1882. It was declared a national historical landmark on Aug. 18 2003.

In an interview with YouthPinoy, New Media Committee head Eilleen Esteban explained how Pedrito was meant to adopt the very Pinoy culture of “picture-picture” by having Pedrito meet pilgrims, have his picture taken with them and post them on social media as part of a geotagging tracking of his whereabouts.

More Pedritos became available to the general public due to a high interest generated by the doll.

Esteban cautioned that the dolls should not be mistaken for religious images to be venerated on altars.

Calungsod, born in the Visayas, was a lay catechist who died while conducting missionary work in the Ladrones Islands, later named Marianas Islands, on April 2, 1672. He was struck by a spear and his skull split by a machete blow. His body was later thrown into the sea. 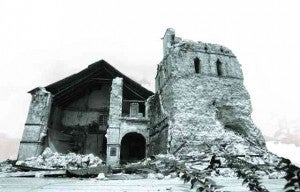 BACLAYON CHURCH
(Bohol)
The Baclayon Church of Our Lady of the Immaculate
Conception is one of the oldest churches in the Philippines. The church, made from coral stone cut from the sea, was completed in 1727. It was declared a national historical landmark in 1994.

Those interested to buy Pedrito dolls may visit www.youthpinoy.com/home/order-your-own-pedrito-doll to make a reservation.

Ortigas said buyers would receive instructions regarding payment and pick-up or shipment in an e-mail confirmation of their reservation.  With a report from Inquirer Research