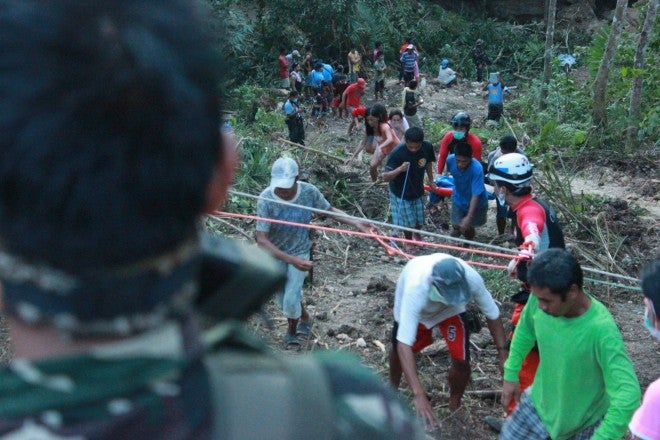 Military and policemen rescuers carries the other retrieved bodies of Mary Grace Polinar and her brother Joseph. Carmel Matus/INQUIRER VISAYAS

SAGBAYAN, Bohol—Her maternal intuition told her her two children were still alive even if they were believed buried under at least 10 feet of boulders, mud and trees in Barangay (village) Katipunan, seven kilometers from the center of this town.

“I am a mother. I have a feeling that my children are still alive,” Genara Somoro, 43, told the Philippine Daily Inquirer as she watched a group of rescuers frantically digging through the debris with the help of a backhoe where a portion of the Bayong Falls had collapsed during Tuesday’s earthquake.

In the adjacent town of Clarin, another mother was asking for a sign from her son so search crew could locate his body.

Estelita Tagsip said she had accepted that her youngest son, Roger, could not have survived beneath the boulders and trees that fell on him and his two cousins while they were fetching water from the Kawasan River. She simply wanted to recover his body so she could give him a proper burial.

But as of 4 p.m. on Saturday, not a single body was found in either of the two operations.

A day earlier, the bodies of Mary Grace Polinar and her brother, Joseph, were retrieved from a pile of rocks, mud and other debris that covered a section the Kawasan River in Clarin where a mountainside had collapsed.

In Sagbayan,  rescuers from Baguio City and soldiers from 6th Special Forces were still looking for Joellene Somoro, 11; her brother Jonalyn, 13; cousins Jess Marvin Empinado, 10, and Meme Jane Empinado, 8; and Reynald Sipsip, 14, an uncle of the Empinados.

Captain Lolito Destajo of the 6th Special Forces Company said they had difficulty in Barangay Katipunan because the ground was soft and the water had started to flow from the collasped water falls.

In the case of Clarin, he added, they had difficulty finding the exact location of Roger Tagsip because the pile of boulders and mud was 30 feet deep and 25 meters wide.

Aside from the operations in Sagbayan and and Clarin, at least three other simultaneous retrieval operations were being conducted in the towns of Loon, Maribojoc and Antequerra, according to T.A.R.S.I.E.R (Telephone and Radio System Integrated Emergency Response) 117.

John Porpor of  T.A.R.S.I.E.R 117, however, said different rescue groups were verifying reports that people were still missing in these areas.

The official number of missing persons reported at the operations center in Bohol was 12, including the five children in Sagbayan town. The others were one in Clarin and six in Loon.

The number of fatalities in Bohol stood at 171 as of Saturday. Twelve fatalities were reported in Cebu and another in Siquijor during the earthquake.

Genara Somoro told the Inquirer that her children Joellene and Jonalyn had not asked permission to bathe in the river below the water falls on Tuesday morning. She would not have allowed them as going to the falls required a three-kilometer hike downhill.

It was only much later, after the earthquake struck, that she found out her children had joined their cousins and uncle in taking a bath in the river.

When she and her husband went to the Bayong Falls to fetch their children, they found the pool of  water covered with bamboo, coconut leavbes, boulders and mud. The children were nowhere to be found.

Prima Empinado, mother of Jess Marvin and Meme Jane, said her two children had asked for permission to go swimming under the falls. They were accompanied by her husband’s brother, Sipsip.

“They were excited to bathe in the river because there was no class that day,” she said.

Like Somoro, Empinado said her heart broke when she learned about what happened to the children.

(With a report from Connie E. Fernandez, Inquirer Visayas Bureau)

Search on for 5 missing children in Bohol quake