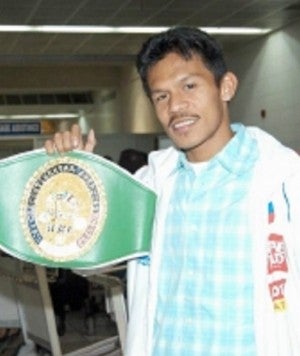 GENERAL SANTOS CITY – Not very many relatives of Manny Pacquiao, the boxer and congressman, may be following him into the ring but at least two more of them are running in the barangay (village) elections on October 28, saying they too have a passion for “serving the people.”

If the so-called Pacman power lifts them to victory, Bobby Pacquiao and Domingo Velbestre – a half-brother – would bring the number of Pacquiao kinsmen in elective positions in South Cotabato, including this city, and in Sarangani to half a dozen.

Bobby is seeking a seat in the village council of Labangal, where his wife, Lorelei is seeking a second term as barangay head. Velbestre, on the other hand, wants to become chairman of vote-rich Barangay Calumpang.

When he entered politics a few years ago, albeit initially failing in his bid for mayor of GenSan, Pacquiao also said he wanted to serve the people.

It was the same line adopted by his brother, Ruel, when he sought the post of barangay chairman of Apopong during the last barangay elections, his wife, Jinkee, when she ran for vice governor of Sarangani,  and Lorelei, when she joined the race for the chairmanship of Labangal village.

Like Pacquiao, who was eventually elected Sarangani representative, Jinkee, Ruel and Lorelie were also victorious in their political bids.

Ruel, who ran but lost in the congressional race in the city last May, had initially pledged not to seek the post he had held in Apopong but later admitted he had changed his mind, also in the interest of service.

He filed his certificate of candidacy on Thursday.

“We wanted to expand our services to the people. In my case, I want to serve my fellow residents in Labangal,” Bobby told reporters after filing his certificate of candidacy.

Domingo Velbestre, an older brother of the boxer-lawmaker, said Pacquiao’s success in politics had inspired him to also become politician.

On top of his agenda, he said, was service to the people.