Search on for 5 missing children in Bohol quake 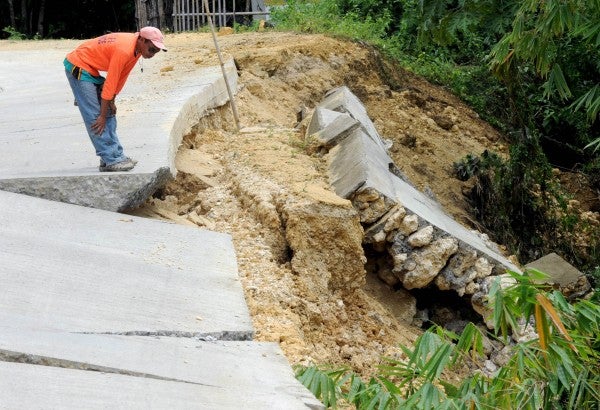 A worker from the Department of Public Work Highway inspect a road in the Village of Cantam-is, Bohol on October 17, 2013, that was damaged during a 7.1-magnitude earthquake that hit the central Philippine island of Bohol on October 15, 2013. AFP

Senior Superintendent Arwyn Pagkalinawan, representative of the Philippine National Police, said in a press briefing at Camp Aguinaldo on Friday that they received reports that five children who went swimming at the waterfalls in Sagbayan were unaccounted for.

“They went swimming and possibly that boulders fell from the cliffs while they were swimming,” he said.

The police officer did not identify the children, but said their ages were between 9 and 15.

Pagkalinawan said that teams from the 6th Regional Public Safety Battalion and Army’s 6th Special Forces Company were deployed to search for the children.

The National Disaster Risk Reduction and Management Council said there were 15 others missing from the Bohol quake.

Aquino: Help is on the way