Aquino: Help is on the way | Inquirer News

Aquino: Help is on the way 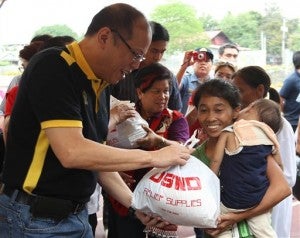 Malacañang gave this assurance on Thursday as the Aquino administration was swamped with calls for assistance from local government units in Bohol and Cebu provinces, which suffered heavily from a 7.2-magnitude earthquake on Tuesday.

Before leaving for Seoul on a state visit on Thursday, President Aquino issued instructions to government agencies to respond to all the concerns of the calamity victims in the two provinces, his spokesman, Edwin Lacierda, said on Thursday.

However, residents in Maribojoc, one of the worst-hit towns in Bohol along with Loboc and Loon, were complaining that government presence in the municipality was hardly visible.

They said they had to rely on their own to survive without power and water supplies before help finally came on Thursday. But it was too meager.

Two sacks, each containing 20 packs of canned goods and rice, arrived in Barangay (village) Candavid—hardly enough for 600 residents, most of whom had been staying for days in waiting sheds and makeshift tents put up in vacant lots and school grounds in the absence of an evacuation center.

When it rained on Wednesday night, the evacuees tried to cover the sides with cloth to prevent them from getting wet, but it hardly worked. They could not go back to their homes after these were destroyed during the earthquake.

“We are in touch with the provincial government, and the national government has been there, and we will continue to pour our efforts to assist the beleaguered people of Bohol. And, as a fellow Boholanon, we will rise,” Lacierda said. His mother was born in Loon, another hard-hit town in the province.

“We already assured the provincial government, as well as the local towns, of the help that is on its way,” he said.

As in many towns in Bohol, Maribojoc’s water system was damaged during the quake. People had to walk for at least one kilometer of rough roads to get to the nearest spring for their water needs.

The Department of Social Welfare and Development (DSWD) could not send relief goods to Maribojoc and Loon after the collapse of the Abatan Bridge that links these two towns to Tagbilaran, the capital city.

The DSWD regional information officer, Jaybee Binghay, said Maribojoc was among the 13 towns that had yet to submit a report on affected families. “Maybe this is the reason they had not received (any relief goods),” she said.

Binghay, however, said the DSWD had identified them as priority areas to visit and check the situation there.

Soliman was expected to fly to Maribojoc on Friday to bring relief goods.

Social workers from the department and local government units are conducting initial critical incident stress debriefing (CISD) sessions for the survivors. The CISD is a psychosocial intervention that helps survivors of disasters cope with their traumatic experiences by pouring out their feelings and fears.

DSWD personnel will go on 24-hour duty to assist the families, according to the regional director, Mercedita Jabagat.

The regional office has partnered with the Philippine Coast Guard to deliver an estimated 10,000 family packs of relief goods to the survivors in Bohol.

“The goods will be coursed through the local government units, said Jennifer Abastillas of the DSWD’s regional disaster risk reduction management unit.

Rescue and medical teams and relief goods have already arrived in Tagbilaran on board the Philippine Coast Guard (PCG) vessel, BRP Edsa, according to the Coast Guard spokesperson.

On Wednesday, about 2,000 family packs were brought to Bohol by a C-130 plane. Each pack contains assorted canned goods, three kilos of rice, two to three packets of noodles and a 4-liter bottle of drinking water.

Balilo said a PCG helicopter also left for Loon, one of the quake-devastated towns in Bohol, to conduct food drops and evacuation missions.

Another aircraft, an Islander, is set to leave to transport a K-9 team to help find residents still trapped in collapsed homes and other structures in the province.

In Loon, at least 600 evacuees staying in tents in the church grounds of Our Lady of Light Parish Church in Barangay Napu have been eating rice and noodles since Tuesday.

They pooled in their rice and noodles together. One of them would cook, using dried twigs as fuel, and then distribute the food to the families who contributed.

The system was meant to reduce the cooking time and resources since water was scarce.

Amid fears of a food shortage, government relief goods finally arrived on board the Coast Guard boat that docked at the municipal port at about 8 a.m.

Sacks of rice, canned goods, used clothing and noodles were brought to the municipal hall about two hours later. Some had to be brought by motorcycles and multipurpose cabs because the roads were badly damaged.

Mayor Lloyd Lopez of Loon ordered the rationing of water to 67 barangays by the municipal fire truck.

People lined up the streets with their empty gallons and containers. When the fire truck finally came, the water was yellowish and was not potable.

The residents relied on the sole water refilling station in Barangay Basak, which opened only Thursday. But the supply could not meet the demand, with more than 100 people waiting outside.

In Barangay Poblacion, Loon, at least 50 people milled outside Uy Kun Enterprise, which provided free charging of cell phone batteries after its owner was able to use his truck battery as power source.

Presidential spokesman Lacierda said the Department of Energy (DOE) had already issued a schedule for the restoration of power in Bohol.

“The DOE is giving updates. There are some towns where electricity was restored already. There is a graduation of restoration of electricity,” he said.

“Some roads have been rendered impassable and we have to clear some areas, making sure that the restoration will not cause further harm to the townspeople. There is a schedule for that,” he added.

At a briefing in Bohol on Wednesday, Aquino was given assurance that power would be restored in the entire province within two to three days.

“The President is very firm that we will restore (normalcy in) Bohol. He went to Cebu and Bohol and gave instructions. Our NDRRMC (National Disaster Risk Reduction and Management Council) is on top of it. Our several Cabinet secretaries are there and other Cabinet secretaries will be going there,” Lacierda said.

The Department of Education (DepEd) will allot some P300 million from its contingency funds to reopen schools immediately in the earthquake-hit provinces.

The funds will be used to buy tents that will serve as temporary classrooms and for repair work in schools that were damaged, Education Secretary Armin Luistro said on Thursday.

Luistro said the President had also promised to allocate more funds for the rehabilitation of the schools.

The DepEd has yet to determine the full extent of damage.

Of the more than 4,000 public schools in Cebu and Bohol, only some 100 have been contacted due to widespread power blackout and extensive road damage, Luistro said. “It’s too small a number to give a real assessment of the situation,” he said.

An 80-member humanitarian mission has left Albay province for Bohol to help provide medical, water and sanitary services to communities in Bohol and Cebu, which were hardest-hit by the earthquake.

“This is part of the payback of Albay and Bicol to all that helped them when they needed assistance,” said Gov. Joey Salceda in a statement posted on his Facebook account on Thursday.

The disaster response measure has been Albay’s 10th undertaking for the past five years. Public assistance services were given to disaster-stricken areas in the provinces of Cagayan, Isabela, Catanduanes, Negros Oriental and Negros Oriental; and the cities of Cagayan de Oro and in Metro Manila.

Salceda said Albay would give P500,000 in cash assistance to Bohol and Cebu, which are its sister-provinces.

Rafael Bernardo Alejandro, regional director of the Office of Civil Defense, said in a phone interview the mission’s first batch of mostly medical and disaster response experts left on Wednesday on a Navy vessel.

The team brought along a water purifying machine, which can produce thousands of liters of potable water for distribution to residents, Alejandro said.

“When they come back to the province, what they would learn in helping other areas will certainly help them in times of necessity,” Salceda stressed.—With reports from Jhunnex Napallacan, Carmel Matus and Connie E. Fernandez, Inquirer Visayas; Cynthia D. Balana, Dona Z. Pazzibugan and Jerry E. Esplanada in Manila; and Mar S. Arguelles, Inquirer Southern Luzon