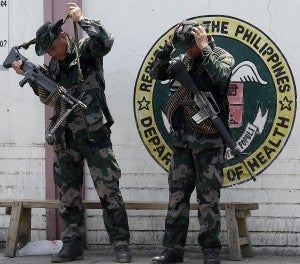 When Magbutay went back to their vehicle to start the engine, the suspects allegedly went towards him, pointed a gun at him, and asked for the vehicle’s key.

When he refused to give it, Nuyda said the suspects shot Magbutay twice in his left foot.

One of the suspects then drove the van and parked it in the middle of the road to create traffic jam, and eventually took the bag of money from inside the vehicle.

The suspects escaped onboard a yellow Yamaha Mio motorcycle.

Nuyda said the case was placed for further investigation, but added that authorities were also looking into several circumstances in the incident that seemed to be doubtful.

For example, Nuyda said that an armed robber usually shoots his victim in the upper part of his body, not in the feet.

And while the area isn’t really isolated, someone carrying a big amount of cash wouldn’t choose to take that route.

Nuyda was also skeptical as to why the group chose to eat in a small canteen when they were already near a fast food restaurant, considering the fact that they were carrying millions of cash.

He also said there were “inconsistencies” in the testimonies of the group.

Police eye inside job in P9.4-M fund robbery in Quezon