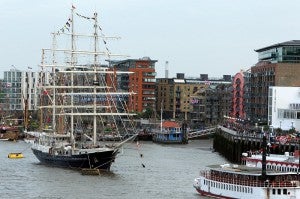 The Office of National Statistics said Wednesday that the number of those out of work dropped 0.1 percentage points from the three-month period through May. In total, there were 2.49 million unemployed people aged 16 and over, down 18,000 from the previous period.

The unemployment rate is now a key economic indicator for the Bank of England — under its new governor, Mark Carney, the bank has said it won’t consider raising interest rates until the jobless rate drops to 7 percent.

The bank’s main interest rate has been at a record low of 0.5 percent since March 2009. Policymakers have also refrained from adding more stimulus, after having pumped 375 billion pounds ($600 billion) into the economy through a bond-buying program.

Chris Williamson, the chief economist of Markit.com, says Wednesday’s figures add to evidence that a hike in interest rates could come before 2016, when most analysts suggest the rate would be at Carney’s target.

“The worry is that any hike in interest rates before real incomes start to revive would set the economic recovery back significantly, as rising demand for staff is still not feeding through to higher wages,” Williamson said.

He noted that pay growth continues to run well below inflation — which stands at 2.7 percent, “meaning incomes continue to fall in real terms, as they have done continually since late-2009.”