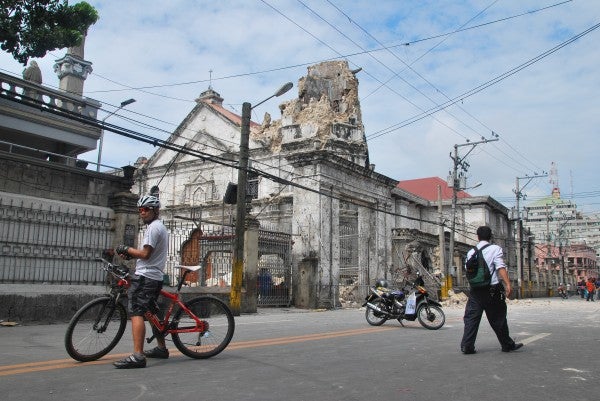 MANILA, Philippines – After historical landmarks sustained heavy damage from the 7.2 quake that hit most of Visayas and parts of Mindanao Tuesday, national cultural agencies banded together to form a task force that would restore these sites to their former glory.

The National Commission for Culture and the Arts (NCCA), National Historical Commission of the Philippines (NHCP), and National Museum (NM) formed the “Heritage Task Force” that would “coordinate closely with the Church, national and local government agencies in the rescue and restoration efforts.”

“On our part, we express our commitment to rescue and later, rehabilitate, damaged heritage structures, many of them churches that have been part of the life of the people for centuries, in collaboration with the Catholic Church, local government officials and communities,” the agencies said in a statement Tuesday.

Most of the affected sites were centuries-old churches, including three of the oldest in the country—Baclayon and Loboc church in Bohol and Basilica Minore Del Sto. Nino in Cebu.

Under the Heritage Law, these structures have been declared National Cultural Treasures, National Historical Landmarks, and Important Cultural Properties.

Starting on Thursday, the expert leading the Heritage Task Force will:

* Establish the severity of damage;

* Identify properties that immediately need to be secured;

* Draw up priorities for restoration;

* Estimate the amount of human and financial resources necessary; and

The statement said the NCCA would provide a mobilization fund for the initial assessment, “pending the national government’s decision on the rescue and rehabilitation efforts as a whole.”

Upon the return of the Heritage Task Force, the agencies responsible will then convene and submit an official report to the Palace.

According to its website, Basilica Minore Del Sto. Nino is one of Cebu’s oldest Roman Catholic church built where the image of the Santo Niño de Cebu was found in 1565.

Meanwhile, the first structure in the Baclayon Church compound was built back in 1595 while the church’s building was from 1727. Its museum features relics dating back to the early 16th century.

Loboc Church is the second oldest church in Bohol rebuilt in 1638 after a fire gutted its original structure.

It is located near the famous Loboc River and both have become major tourist attractions for the province.