MANILA, Philippines  — The death toll from a 7.2-magnitude earthquake that struck Bohol and other parts of the Visayas and Mindanao rose to 85, police said Tuesday, as more reports trickled in about toppled buildings and historic churches near the epicenter.

Bohol police chief Dennis Agustin said that over 60 of the deaths came from the province, where the quake hit near the town of Carmen. At least 16 others died in nearby Cebu province and another on Siquijor Island.

Meanwhile, in a text message to reporters, Police Officer 3 Carl John Legazpi, operations clerk of the Bohol provincial office, said that there were 62 fatalities from several towns in Bohol. 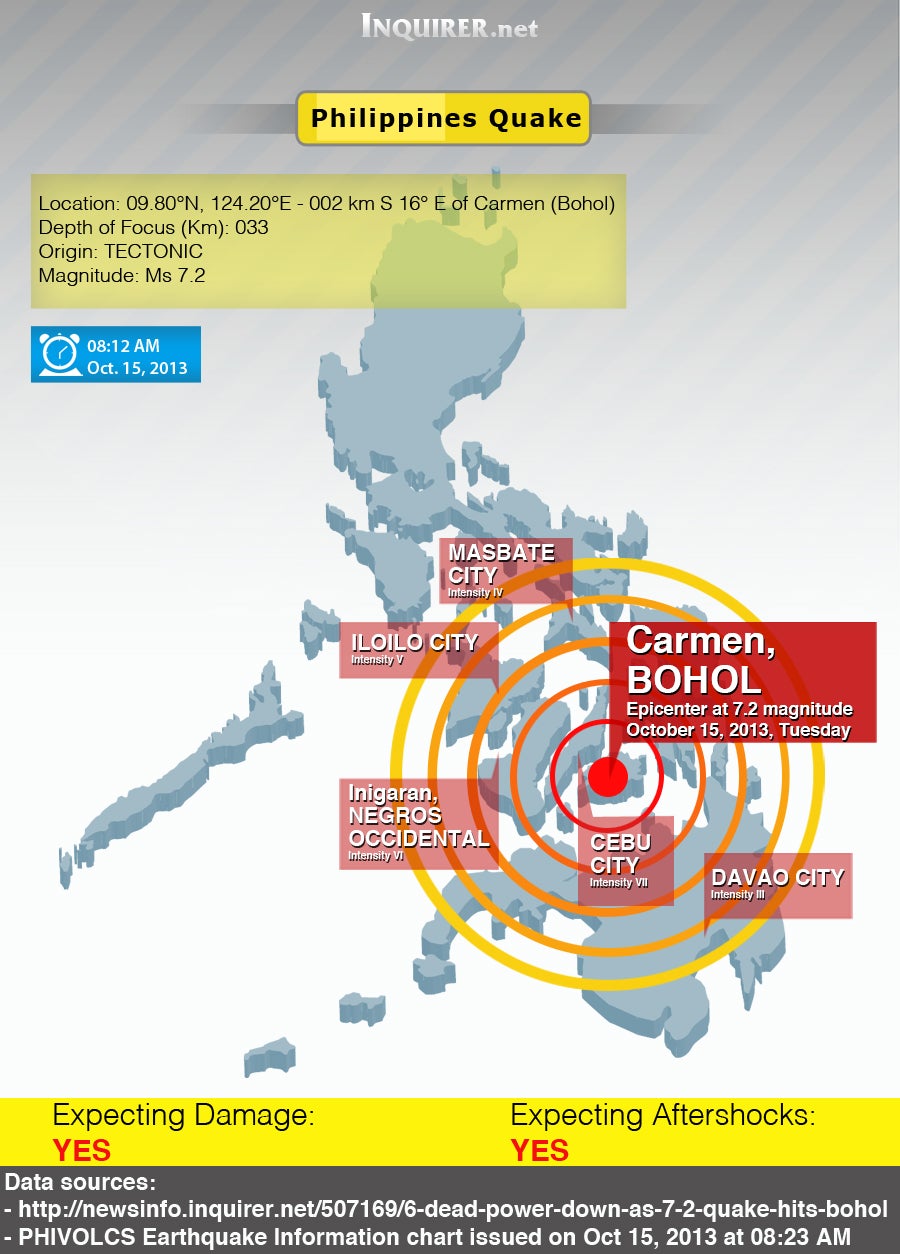 The quake struck at 8:12 a.m. and was centered about 33 kilometers (20 miles) below Carmen on Bohol Island, where many buildings collapsed, roads cracked up and bridges fell.

Extensive damage also hit densely populated Cebu city, across a narrow strait from Bohol, causing deaths when a building in the port and the roof of a market area collapsed.

The quake set off two stampedes in nearby cities. When it struck, people gathered in a gym in Cebu rushed outside in a panic, crushing five people to death and injuring eight others, said Neil Sanchez, provincial disaster management officer.

“We ran out of the building, and outside, we hugged trees because the tremors were so strong,” said Vilma Yorong, a provincial government employee in Bohol.

“When the shaking stopped, I ran to the street and there I saw several injured people. Some were saying their church has collapsed,” she told The Associated Press by phone.

As fear set in, Yorong and the others ran up a mountain, afraid a tsunami would follow the quake. “Minutes after the earthquake, people were pushing each other to go up the hill,” she said.

But the quake was centered inland and did not cause a tsunami.

Offices and schools were closed for a national holiday — the Muslim festival of Eid al-Adha — which may have saved lives.

The earthquake also was deeper below the surface than the 6.9-magnitude temblor last year in waters near Negros Island, also in the central Philippines, that killed nearly 100 people. With a report from AP

State of calamity declared in Bohol