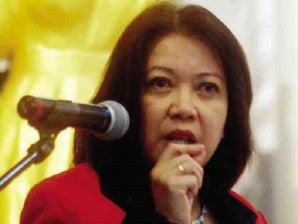 MANILA, Philippines—Chief Justice Maria Lourdes Sereno has asked the National Bureau of Investigation (NBI) to probe an alleged big-time fixer in the judiciary and alleged underhanded tactics resorted to in the just-concluded election of the Philippine Judges Association (PJA).

Sereno met with Justice Secretary Leila de Lima Monday morning to discuss the Department of Justice’s offer of NBI help in the investigation of a “Ma’am Arlene,” who has allegedly been influencing court decisions.

News stories linked the alleged influence peddler to the PJA election on Oct. 8.

De Lima told reporters that Sereno “formally requested” the NBI’s assistance after the justice secretary was quoted in news reports as saying she was willing to offer the NBI’s help if asked by the Supreme Court or by the Chief Justice.

“I think it’s OK with her that it’s a parallel probe to whatever probe is being conducted now by the Supreme Court through Court Administrator Midas Marquez… about that certain Ma’am Arlene who is allegedly the Napoles in the judiciary,” she said.

But De Lima could not specify the criminal offense the NBI would be investigating.

She also could not say if the judges involved in the PJA election would be summoned to a formal investigation.

“These are serious allegations… whatever it is, whether related to the (PJA) elections or not, it needs to be investigated because it has something to do with corruption in the judiciary,” De Lima said.

“In fact, another thing that the Chief Justice wants investigated are the reported irregularities in that election because it seems that due to the intense rivalry of the principal contenders, reports reached the Chief Justice that unpleasant activities had occurred, that it turned into a political game,” she said.

Later in the day, Sereno said she had “accepted (De Lima’s) offer to help investigate” the alleged influence-peddler whom she did not name.

In her statement, Sereno also did not say if her decision to tap the NBI had been approved by the 15-member Supreme Court.

“The Chief Justice will submit to the Supreme Court en banc the result of her request for De Lima to use the investigative resources of the Department of Justice to determine the facts concerning the following and file a report thereon with the Chief Justice,” she said.

The NBI will look into “possible violations of applicable criminal provisions in the recently concluded election of the Philippine Judges Association by any or all of the presidential candidates,” she said.

Sereno said the NBI will also look into “the identity of private persons who, prima facie, appear to have unlawfully influenced specific members of the judiciary in the outcome of specific cases” which may be linked to the PJA election.

She said the NBI investigation will run parallel to the administrative fact-finding probe being conducted by Court Administrator Marquez.

Sereno further said she had initiated discussions with Ombudsman Conchita Carpio Morales, herself a former Supreme Court justice, for the Office of the Ombudsman to undertake lifestyle checks on the members of the judiciary and court personnel.