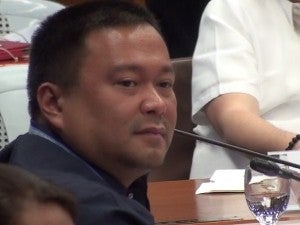 MANILA, Philippines—As more senators admitted surprise at getting additional funding through the Disbursement Acceleration Program (DAP), Sen. JV Ejercito on Monday filed a resolution seeking an inquiry into the facility.

Senate Majority Leader Alan Peter Cayetano said he also had filed a resolution for the chamber to look into the misuse of the Malampaya Fund.

In his proposed Resolution No. 287, Ejercito said the DAP should be scrutinized in the face of allegations that funds released through this program were sourced from slow-moving projects, not savings, in possible violation of the Constitution.

“There were also allegations that funds from the Disbursement Acceleration Program were used to bribe or give incentives to senators and congressmen who voted for the impeachment of Chief Justice Renato Corona,” he said.

Budget Secretary Florencio Abad later announced that the extra bonus came from the DAP, which he described as an impounding mechanism for government savings meant to ramp up spending to pump prime the economy.

He said 20 senators received additional pork barrel amounting to P1.107 billion months after Corona’s conviction. Santiago, Arroyo and Marcos were not among the recipients of the additional largesse.

Also on Monday, Cayetano said all the senators were requested to draw up a list of priority projects to be funded with P100 million in 2011.

Cayetano said that like some of his colleagues, he was also surprised the fund releases to their projects were coursed through the DAP.

He said that whenever the senators requested funds, they assumed that these were coming from either the Priority Development Assistance Fund (PDAF), or from savings.

“By the way, regarding the story that came out in the Inquirer that six senators got P100 million, what we know is that all of us were told that we could request a uniform P100 million, but we weren’t sure if this would be approved,” Cayetano told reporters.

The senator could not recall if his P100-million request was approved. But he maintained that “100 percent” of the projects benefited many areas, and that no single centavo ended up in their pockets.

Sen. Antonio Trillanes IV, for his part, confirmed that his request for P100 million for his projects in 2011 was approved.

Nothing to do with Corona

“We requested P11 million worth of projects, and this was approved,” Trillanes told reporters. “This is periodic. We didn’t connect it with the impeachment.”

But like his colleagues, he assumed this was sourced from the PDAF, reviled as a source of massive kickbacks to lawmakers over the past decade.

On Drilon’s instruction, the six senators submitted their priority lists to their colleague in late November 2011, months before senators voted to convict Corona.

A month earlier, the Department of Budget and Management announced the implementation of P72.11 billion in additional projects funded through savings from 2010 and 2011.

Meanwhile, Cayetano said he had asked Guingona, chair of the Senate blue ribbon committee, to open the hearings on the Malampaya Fund scam.

“So that every issue that’s coming out is investigated, and since this is open, the public would see who’s stealing from the country’s coffers, where the funds are going, and what is happening,” he said.