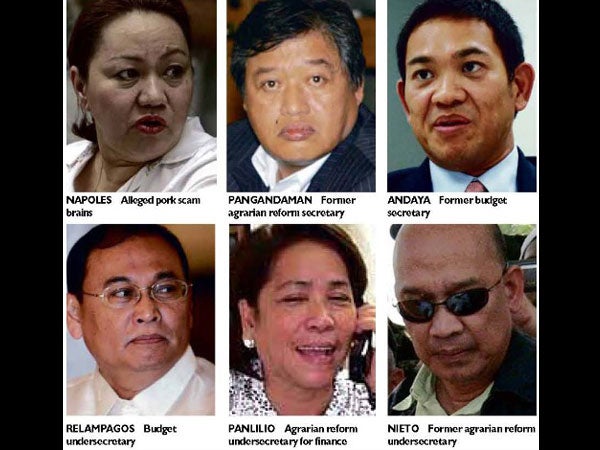 MAIN CHARACTERS Former secretaries and ex- and current undersecretaries of the agrarian reform, budget and finance departments, together with Janet Lim-Napoles, are among those who will be charged Thursday with either plunder or malversation before the Office of the Ombudsman for their alleged involvement in the P900-million Malampaya Fund scam.

Former Agrarian Reform Secretary Nasser Pangandaman, Janet Lim-Napoles and heads of bogus nongovernment organizations (NGOs) are among some 20 people recommended to be charged Thursday with either plunder or malversation in the Office of the Ombudsman for their involvement in the P900-million Malampaya Fund scam, lawyer Levito Baligod said on Wednesday.

Cecilio Zamora, spokesman of the National Bureau of Investigation (NBI), said the bureau would file the plunder and malversation charges, and submit a “truckload of evidence” to the Office of the Ombudsman in Quezon City on Thursday.

Zamora said among those to be recommended for prosecution were former and current officials of the Department of Agrarian Reform (DAR) and Department of Budget and Management (DBM).

Besides Pangandaman, former Agrarian Reform Undersecretary Narciso Nieto and DAR finance officer Teresita Panlilio were among those to be charged.

Baligod declined to name the two DBM officials, saying it was up to the Department of Justice to name them. But sources said former Budget Secretary Rolando Andaya and Budget Undersecretary Mario Relampagos would also be charged.

The P900-million fund was supposed to benefit victims of the back-to-back Tropical Storms “Ondoy” and “Pepeng” that hit Luzon in 2009, but was remitted instead to Napoles, alleged mastermind of the P10-billion pork barrel scam, through 12 NGOs that she had set up.

Last month, the NBI filed plunder and malversation charges against Napoles, three senators and 34 others in connection with the pork barrel scam.

Each of the NGOs received amounts ranging from P55 million to P82.5 million, according to the liquidation report.

No mayor to be charged

Baligod, a lawyer of the whistle-blowers, said that no mayor would be charged in connection with the Malampaya Fund scam.

“The beneficiaries and signatures of the [90] mayors were all forged. There was no delivery of goods,” he said.

Baligod said he would act as a private complainant in the Malampaya Fund scam and that the NBI complaint would be signed by its officer in charge, Assistant Deputy Director Medardo de Lemos.

Merlina Suñas, a former Napoles employee and whistle-blower in the pork scam, earlier said Napoles had assigned her as project coordinator with the DAR for the Malampaya Fund operation.

In her affidavit, Suñas said the signatures of Nieto and the heads of the NGOs in the tripartite memorandum of agreement for the distribution of the P900 million were genuine, but those of the mayors were forged.

She said the local government units (LGUs) were made the supposed beneficiaries of the fund without their knowledge. The Napoles NGOs were supposed to deliver agricultural kits to the LGUs.

Suñas and Benhur Luy, another whistle-blower and a former Napoles employee, said there were no deliveries for the DAR livelihood projects because the signatures of town mayors and the names of recipients on the list were forged.

Luy said Napoles had been tipped off of the plan of the Arroyo administration to release money from the multibillion-peso Malampaya Fund, royalties from the gas project off the west coast of Palawan province.

He said Napoles was given the information three months before Malacañang issued the directive releasing money from the Malampaya Fund.

Luy said Napoles called for a meeting of her JLN Corp. staff in their office at the Discovery Suites in Pasig City in July 2009 after she found the Malampaya Fund as a new source of their “racket.”

It was on Oct. 13, 2009, when then Executive Secretary Eduardo Ermita gave the go-signal to agencies to use the Malampaya Fund “in such amounts as may be necessary for relief operations, rehabilitation, reconstruction and other works and services to areas affected by natural calamities.”

Nine days later, Nieto formally requested a P900-million budget “to provide directly to our farmer-beneficiaries the necessary inputs to help them recover from their losses” in a letter to Andaya.

The Arroyo administration spent a total of P14 billion from the Malampaya Fund supposedly for areas devastated by Ondoy and Pepeng.