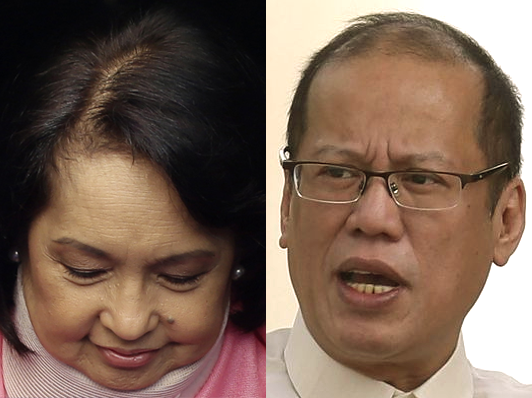 Bristling at the tag “pork barrel king,” President Aquino on Wednesday accused his predecessor, Gloria Macapagal-Arroyo, of accumulating close to P1 trillion in discretionary fund to stay in power.

The President, assailed over the release of P1.107 billion in pork barrel to senators after the Senate convicted Chief Justice Renato Corona in May 2012, shifted the spotlight on the Arroyo administration in the current saga of scams.

The President himself wondered whether portions of the alleged Arroyo loot were being used in black propaganda against him.

“It could have surpassed P1 trillion. How much was lost, stolen and played around with, or used in transactions to stay in power?” Aquino said at the Brotherhood of Christian Businessmen and Professionals’ Grand Breakfast at the SMX Convention in Pasay City.

“Is it too much to suspect that this money is now being circulated to undermine your trust in daang matuwid (straight path)? To sow trouble and terror in many forms, and challenge those of us who had long been abused, and are now seeking justice to hold the violators accountable?” he added.

Arroyo, now a Pampanga representative, is under house arrest on plunder charges.

And while he’s become the target of criticisms over the large-scale misuse of the congressional Priority Development Assistance Fund (PDAF), or pork barrel, the President vowed not to turn his back on reforms.

“I just shake my head when I get called pork barrel king even if I have removed the discretion to commit graft; I have tightened spending, stopped budget reenactment and insertion, misuse of lump sum funds, and even the over-importation of rice. You be the judge of what runs in the minds of those saying this,” he said.

When he assumed the presidency, Aquino said he was aware of the stumbling blocks and danger that lay ahead.

“I’m not Superman; I can be hit by bullets, be poisoned, or even be attacked with a knife. But we have crossed over. We’ve made a choice. We can be cowed by fear, or fight for the right. We can turn a blind eye to or enforce the mandate given to me by the Boss. We will do what is right,” he said.

“Let’s be clear on this: Neither the exposé of Mr. Benhur Luy, nor the arrest of Mrs. Napoles started our campaign against corruption,” said Aquino who accepted the surrender of Janet Lim-Napoles, dubbed the pork scam queen, on Aug. 28 and escorted her to Camp Crame for detention after she said she feared for her life.

The President said initial studies had shown that the Arroyo administration skimmed off P637.36 billion in savings from reenacted budgets; P23.33 billion from the Malampaya Fund; and a P177-billion loan for rice importation.

“The fund that became discretionary and that could have been used to perpetuate the padrino system is estimated at P836 billion,” he said.

These are on top of the P140.6 billion accruing from the “doctored” automatic outlays in the General Appropriations Act, he added. All the four items add up to P978.29 billion. These four mechanisms had been put to a stop, the President said.

“If we put it side by side with this: Their average annual budget in close to 10 years was P1 trillion every year. Isn’t this very abhorrent? That they had at their disposal a budget equivalent to an annual national budget and used it as they pleased?”

“We’re not done seeking answers to our questions: Who did it, what exactly did they do, where did the money go, who benefited? Who are the real culprits? We’re not doing this by chance. We’re gathering evidence directly from agencies, despite the traps,” he added.

After the National Bureau of Investigation filed charges against Napoles, three senators and 34 others over the P10-billion pork barrel scam, the Aquino administration has found itself responding to criticisms about fund releases to senators after convicting Corona in May 2012.

Sen. Jinggoy Estrada, one of those charged in connection with the scam, divulged in a privilege speech on Wednesday the release of P50 million to senators’ projects following Corona’s conviction.

In May 2012, the senators voted 20-3 to convict Corona for dishonesty in his statement of assets, liabilities and net worth. Senators Miriam Defensor-Santiago, Ferdinand Marcos Jr. and Joker Arroyo voted against his conviction.

In his speech, the President said he had abolished the system of PDAF and cleared the filing of charges against key scam players to put a stop to the abuse of the discretionary fund.

As more pieces of evidence are gathered, more charges will be filed against other personalities, he added.

“It’s clear the abuse of PDAF was wrong. Many had been deprived of opportunities because of the misuse of this fund, especially if we factor in the multiplier effect of the program. It was wrong to use bogus NGOs. It’s estimated that P10 billion was diverted from this racket. That’s why, it’s time to reveal to you the product of bad governance that we inherited and we’re trying to fix,” Aquino said.