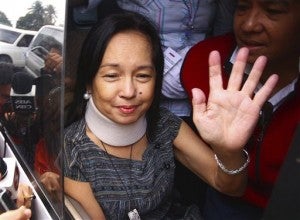 Former President Gloria Macapagal-Arroyo on Thursday declined to comment on the plunder charges filed against her in the Office of the Ombudsman in the alleged misuse of P900 million from the Malampaya Fund, but her budget secretary protested that the inclusion of officials doing ministerial functions in the case was setting a “worrisome” precedent.

Raul Lambino, a lawyer for Arroyo, now a Pampanga representative under hospital arrest on a plunder charge involving funds of the Philippine Charity Sweepstakes Office, said that as far as his client was concerned, “the use of the P23-billion Malampaya Fund was authorized pursuant to policies and purposes as mandated by provisions of Presidential Decree No. 920.”

Lambino said this was the only statement he was allowed to make at this point.

PD 910 was adopted in 1976. It laid down the ground rules for the use of royalties from oil and gas finds in the country, specifically  “to finance energy resource development and exploitation programs and projects of the government.”

While the Malampaya Fund is supposed to be spent only for energy-related projects, Arroyo interpreted its provisions liberally to use the funds outside of the energy industry.

Camarines Sur Rep. Rolando Andaya Jr. protested the plunder complaint filed against him, saying he was just doing his job as secretary of the Department of Budget and Management (DBM) when he released funds from the Malampaya Fund for typhoon victims.

In a statement, Andaya said he was not aware that some people were awaiting the release of the funds “to take advantage of a tragedy so as to make money and do their racket.”

“What’s worrisome is that we are setting a precedent wherein all those involved in the ministerial release of the funds, including DBM officials, should be from now on become automatic coaccused in every graft cases to be filed in the country,” he said.

“If one district engineer buys one pail of fake asphalt or one school principal hijacks money intended for books or a mayor steals the money for medicines, does this mean that he or she would be charged alongside with the automatic coaccused from the DBM?  Maybe I need a battalion of lawyers to deal with the charges against me,” he added.

He said that not every request for fund release should be treated with criminal suspicion.

Andaya also said the whistle-blowers had never mentioned him in their affidavits and that they had not seen or talked to him. He also said Napoles did not know him and they had no photograph taken together.

“If the so-called masterminds are the ones saying that I have no direct involvement in the plunder of the Malampaya Fund, why am I now being dragged into this? Why am I being made as coaccused if [pieces of] evidence show that my only participation is the expediency in the manner of the release of the funds to alleviate the miseries of the typhoon victims?”

Andaya insisted he did not profit from the so-called Malampaya scam and that his only sin was he followed an order and the law to help flood victims.

“Again, I’m begging my accusers to invite me in their quest for truth. I am just here on the sidewalk of daang matuwid,” he said.

Budget Secretary Butch Abad, in a statement on the inclusion of Budget Undersecretary Mario Relampagos in the plunder charges said:

“The DBM will cooperate fully with the investigation, especially with respect to the present inquiry on the use of Malampaya Fund/PDAF. However, we cannot comment on Usec Relampagos’ alleged involvement in this matter. We will also wait until the investigation has concluded before we proceed with the appropriate course of action,” Abad said.—With a report from Michael Lim Ubac