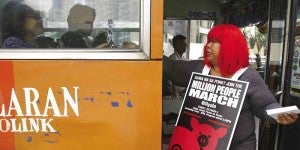 Don’t take us for fools.

Groups calling for the abolition of the pork barrel are not convinced that it has been excised from next year’s P2.268-trillion national budget.

Thus, a bigger and “angrier” crowd representing mostly professionals and ordinary taxpayers is expected to turn up at the Million People March on Ayala Avenue in Makati City on Friday.

“They’re treating us like we’re all tanga (stupid). I’m referring to the senators, the congressmen and, most especially, the President,” Peachy Rallonza-Bretaña, one of the organizers who was also part of the first Million People March at Manila’s Rizal Park in August, told the Inquirer by phone on Thursday.

Ayala Avenue and Paseo de Roxas will be closed to traffic to make way for the people’s protest march against pork, according to the Makati City government. The program is expected to start at 5:30 p.m. and end at 8 p.m.

The #MillionPeopleMarch @Ayala is part of the series of antipork barrel rallies set off by the misuse of the Priority Development Assistant Fund (PDAF) over the years.

Outrage over the PDAF misuse led to the Million People March in Manila on Aug. 26 that attracted some 75,000 people. Similar protests were conducted that day across the country and overseas.

Since then, more protests against pork have been waged.

In the P10-billion pork barrel scam allegedly masterminded by Janet Lim-Napoles, a lawmaker pocketed 50 percent of a ghost project funded by his PDAF, according to whistle-blower Benhur Luy. Napoles got 40 percent and government “conduits,” the remaining 10 percent.

And more infuriating, Bretaña said, were revelations about how a version of the pork barrel—the little-known Disbursement Acceleration Program (DAP) of the Department of Budget and Management—had allegedly been used to bribe senators and representatives in connection with the impeachment trial of then Chief Justice Renato Corona in 2012.

Senators who voted for the conviction of Corona received from P50 million to P100 million while many House members were each given an additional P10 million.

“My God! It’s pork under a different name!” she said, recalling the dominant reaction when she and her group learned about the DAP during a meeting in Tagaytay City.

Organizers of the protest hope to bring the movement against pork to the next level at Ayala Avenue by inviting businessmen and employees to join.

Two groups participating in the protest, #ScrapThePork Alliance and BPO Industry Employees Network-Philippines, will launch a “Tax Holiday vs Pork Barrel” campaign in front of the Philippine Stock Exchange.

Organizers said the campaign was aimed at calling on President Aquino to give employees and call center agents a break from paying income taxes for at least three months.

The groups expressed alarm over the “widespread bureaucratic corruption” in the country through the pork barrel.

Bretaña said her group didn’t like that Malacañang had been limiting the scope of the pork barrel system to the PDAF enjoyed by members of Congress.

During the rally, experts such as former National Treasurer Leonor Briones will come up with a “presentation” on what really constitutes pork barrel.

Per their definition, pork covers “lump-sum appropriations” and allows the exercise of “discretion”—a description that also points to the much bigger lump-sum funds of President Aquino.

“It’s time to define for the people what pork barrel really is,” Bretaña said. “The goal is to put everyone on the same page.”

On the eve of the #[email protected], Briones tweeted: “It’s like we’re being deliberately confused by complicated terms in budget when it should be something all of us should understand.”

Having a clear understanding of the pork barrel system would keep the Palace and legislators from escaping the demand to scrap the entire “pork barrel system” and not just the PDAF, Bretaña argued.

So far, she said Aquino and his allies were defining the pork barrel as it suited them.

“They’re not addressing the issue—they’re just spinning their own web,” Bretaña said.

In approving the 2014 budget on second reading, the Aquino-controlled House of Representatives deleted the item on PDAF, distributing a total of P25.4 billion among six government agencies.

But as in the old PDAF system, House members were asked to “recommend” up to five projects for which the allocation for public works (P9.954 billion) would be spent.

Members of the House also opted not to touch the President’s own pork barrel, the P450-billion Special Purpose Funds (SPF).

Critics described the entire SPF item as presidential pork barrel because Aquino would ultimately decide where the money would go.

“Everything that they’re doing makes us believe that they don’t want the pork barrel scrapped because that’s where they get their money,” Bretaña said.

“There is corruption everywhere. If proven, there should be conversion from those who committed it,” Tagle said over Radio Veritas.

The cardinal earlier said that the pork barrel scam was a form of injustice, saying that “instead of giving what is due to others and to the country, resources are being denied from them.”

“We do not only lack love for others but we also lack a sense of justice,” he said during Caritas Manila’s Generosity Conference on Sunday.

Tagle called on Filipinos to turn their back from greed by “letting the values of fairness and generosity reign in their lives.”

He urged the faithful to be sensitive to the needs of the less fortunate.

In an advisory issued by the Makati City Public Safety Department, starting 10 a.m. onward on Friday, the stretch of Paseo de Roxas from the corner of Ayala Avenue to Sedeño Street would be closed to traffic for the setting up of the staging area in front of the Ninoy Aquino statue.

At 2 p.m. onward, both lanes of Ayala Avenue from Makati Avenue up to Herrera Street would also be closed to traffic for the people’s assembly, Makati’s traffic chief Hermenegildo San Miguel said.

All vehicles from McKinley Road going toward the Central Business District and Legaspi Village shall take Arnaiz Avenue and a right turn to Paseo de Roxas toward destination, and vice versa.

Motorists bound for Salcedo Village will be allowed to enter Ayala Avenue then make a right turn to Apartment Ridge, left turn to Sta. Potenciana then left turn to Paseo de Roxas toward their destinations.—With a report from Tina G. Santos