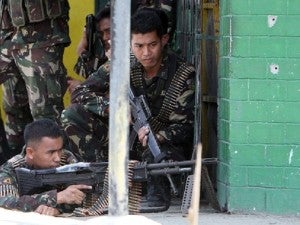 Reports from the military’s main headquarters at Camp Aguinaldo said the three soldiers wounded were part of the Army’s 3rd Scout Ranger Battalion. The two other wounded were members of the Civilian Volunteers Organization. The fatality was also a CVO.

One CVO was also reported missing.

However, Radyo Inquirer 990AM, quoting Lamitan City Vice Mayor Roderick Furigay, reported that at least five others were missing.

Military spokesman Brigadier General Domingo Tutaan Jr. said the gunmen were members of the MNLF and the Abu Sayyaf group.

Authorities were still checking if the clash that started at around 8:30 a.m. near the police headquarters in Colonia village was related to the standoff in Zamboanga City, Tutaan said.

Government Mujiv Hataman of the Autonomous Region in Muslim Mindanao said “more or less 100” Abu Sayyaf gunmen were on their way to Campo Uno, the police headquarters, when they clashed with Scout Rangers.

He denied that the gunmen were MNLF members, and that the planned attack was related to the standoff in Zamboanga City.

The clash lasted for 30 minutes, Hataman said, with the Abu Sayyaf extremists withdrawing and being pursued by government troops.

Authorities were starting to evacuate affected families to a temporary shelter, Johnny Maquinad, operations officer of the Office of Civil Defense in Basilan, Sulu and Tawi-Tawi, told Radyo Inquirer.

Basilan island province is a boat ride away from Zamboanga city, where MNLF fighters have been holding their hostage since Monday, when government troops repulsed their attempt to erect a rebel flag at city hall.

The three-day crisis has virtually paralyzed Zamboanga, a lively trading city of nearly a million people, with most flights and ferry services suspended. Communities near the clashes resembled a war zone, with armored troop carriers lining streets, troops massing at a school and snipers taking positions atop buildings. A mosque and its minaret were pockmarked with bullet holes.

Nearly 15,000 villagers have fled from the fighting and took shelter at a grandstand in a seaside sports complex and schools. Troops were under orders to prevent the rebels from straying beyond the communities they have seized or getting reinforcements, Interior Secretary Mar Roxas said.

The rebels signed a peace deal in 1996, but their faction leader accuses the government of reneging on a promise to develop the impoverished, restive region. The rebel leader, Nur Misuari, has isolated himself and set out on a collision course with the government when he voiced opposition to the ongoing peace talks between the Philippines and the currently-dominant rebel movement, the Moro Islamic Liberation Front.

The talks have steadily progressed toward a new and potentially larger Muslim autonomy deal, but Misuari felt left out. Last month, his group issued new threats to secede by establishing its own republic.

At least nine combatants and villagers have been killed since the standoff in Zamboanga began, officials said. President Benigno Aquino III has sent top Cabinet officials and his military chief of staff to oversee the security crisis in the country’s restive south, the scene of decades-long Muslim unrest in this predominantly Roman Catholic nation.

Misuari has not appeared in public or issued any statement since his followers barged into Zamboanga city’s coast early Monday and clashed with soldiers and police.

A gunbattle erupted at rebel-held Santa Catalina village on Wednesday, where an AP photographer saw from a distance about 30 villagers, believed to be hostages, who waved white cloths in front of a house and yelled, “Don’t fire, don’t fire.”

Zamboanga City Mayor Maria Isabelle Climaco said the rebels were demanding international mediation, adding that the rebels have so far refused to talk with provincial officials.

“They say that it’s an international problem, and no less than the international community, the U.N., should come in,” she told ABS-CBN TV network. With a report from Associated Press