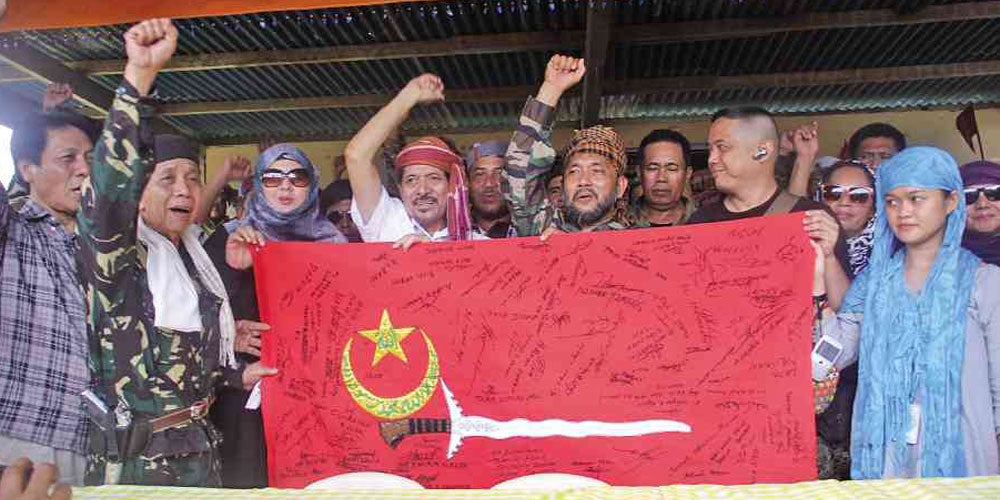 Between 200 and 300 followers of Misuari entered coastal villages on the outskirts of Zamboanga City by boat at dawn, triggering clashes with government forces that left at least one Navy Special Forces soldier and four civilians killed and six other Navy soldiers, including an officer, and 14 civilians wounded, the military said. An earlier report said one policeman was also killed.

Fighting later spread to the city itself, with Misuari’s followers taking civilian hostages in Sta. Catalina village here to thwart an attack by government forces.

Lt. Col. Ramon Zagala, a spokesman for the military, said some of Misuari’s fighters were boxed in the coastal village of Rio Hondo and  refused to negotiate with security forces.

Zamboanga City Mayor Maria Isabelle Climaco-Salazar said the MNLF fighters were holding 38 people and were demanding to be allowed to march to city hall and hoist their flag there.

“We seized them by the roadside so the soldiers won’t shoot when they see us.”

But Brig. Gen. Domingo Tutaan, spokesman for the Armed Forces of the Philippines (AFP), said the civilians were just “stranded.”

“They are not under the armed control of the MNLF,” Tutaan said.

Salazar ordered the military and the police to secure hospitals, news outlets, utilities and commercial establishments to prevent Misuari’s fighters from taking more hostages, and gaining access to public communication, medicines and provisions.

Aviation authorities suspended all commercial flights to Zamboanga International Airport and ferry services to the Port of Zamboanga as government troops secured points of entry to prevent the entry of more followers of Misuari.

Salazar said the city grandstand had been converted into an emergency center for more than 300 people who had been evacuated from their homes on the coast.

“Everything is being done to resolve the crisis as soon as possible with minimal damage to life and property,” Salazar said.

“We condemn the attack on Zamboanga City in the strongest possible terms,” presidential spokesman Edwin Lacierda said in a statement issued by Malacañang.

“It is incumbent on all people of goodwill to reject the violence that has erupted,” Lacierda said. “The ongoing attack of armed individuals in Zamboanga City, including initial reports of the possible use of civilians as human shields, is a cause for great concern. The authorities are responding to the situation in a manner that will reduce the risk to innocent civilians and restore peace and order to Zamboanga City at the soonest possible time.” 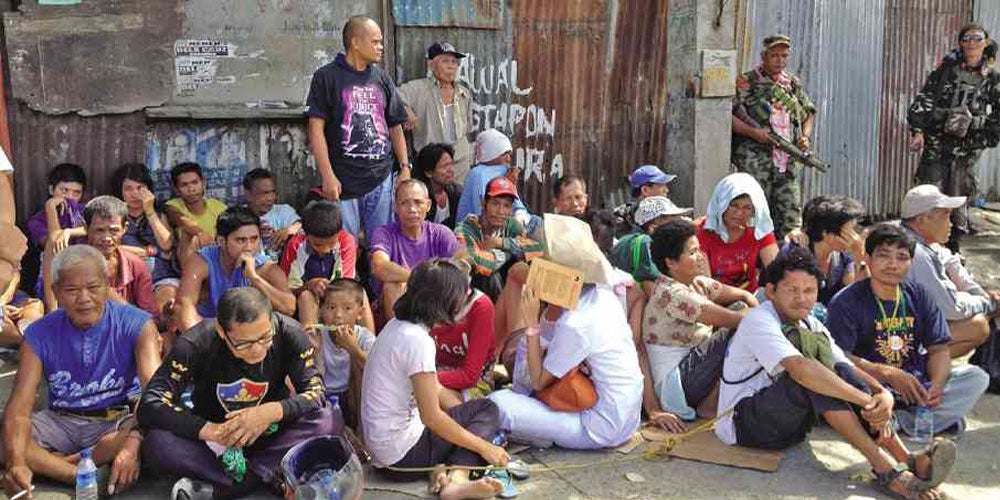 Zagala said the MNLF fighters planned to march into Zamboanga City and hoist their flag at city hall, but government forces discovered the plan three days ago and took defensive positions.

“We cannot allow another armed force to march around our cities. That is unacceptable,” Zagala said.

The turbulence began with the arrest on Sunday night of five MNLF fighters who were seen in Zamboanga City wearing military uniforms and carrying firearms.

Huesca said MNLF members were not banned from the city. What the law forbids is the wearing of military uniforms and the display of firearms, he said.

A military source said the arrested MNLF men had said they had been told to attend the “raising of the Bangsamoro flag” at Zamboanga City Hall.

The attack of Misuari’s group on Zamboanga City came as a surprise to the other MNLF faction led by former Cotabato City Mayor Muslimin Sema.

Sema told the Inquirer by phone that his group had directed its ground commanders in Central Mindanao, Western Mindanao and Lanao del Norte “to stay put and not be swayed” by the ongoing situation in Zamboanga City.

“We are saddened by what is happening and we are worried that this might trigger a bigger (incident). We don’t know, this might snowball because those who are opposing the government’s stand on the MNLF final peace agreement might be swayed. This is the challenge everybody is facing now,” Sema said.

It is believed that Misuari’s followers entered coastal villages as early as Sunday night, crossing the sea in small boats from Basilan province.

Zaldy Astam, a resident of Sta. Catalina, said armed men knocked from door to door in the village on Sunday night asking for food.

“They left after eating,” Astam said.

The presence of gunmen alarmed the villagers, he said.

“They carried high-powered firearms. All were in MNLF uniforms. They said they were from Basilan, but they did not hurt us. Some of my neighbors were frightened and reported it to the village officials,” he said.

At dawn, the companions of the five men attacked villages on the coast, but were met by combat-ready government forces.

Their plan foiled, the MNLF fighters holed up in Sta. Catalina and seized civilians to stop an assault by security forces.

Some of the attackers abandoned their weapons and fled to the city. Five of them were arrested in the morning and would be charged if witnesses would come forward to testify that they were among the attackers, Huesca said.

The military’s Western Mindanao Command (Wesmincom) deployed additional troops to Zamboanga City and other parts of the region where other MNLF forces might try to enter.

Maj. Gen. Rey Ardo, the Wesmincom chief, said he had ordered additional troops to Zamboanga City from the peninsula and Basilan.

Ardo said the military had been monitoring the MNLF fighters’ movements for three days.

“[We] apprehended some of them last night,” he said, referring to Huesca’s report, “but some managed to board commercial vessels and they were able to secure firearms from their local allies and relatives in Zamboanga City.”

Ardo could not say how many MNLF fighters attacked the city, but said the military knew that “it’s Habier Malik who is leading the group while Nur Misuari is in Talipao (Sulu).”

Malik is an MNLF commander based in Sulu.

The MNLF signed a peace agreement with the government in 1996, but hundreds of its fighters held on to their arms, accusing the government of reneging on a promise to develop an autonomous region for Muslims in Mindanao.

The two sides resume talks in Kuala Lumpur on Tuesday, hoping to settle details of provisions in the preliminary agreement involving power sharing and disarmament.

They hope to sign a final peace agreement before President Aquino’s term ends in 2016.

But Misuari was nowhere to be found as his followers attacked Zamboanga City on Monday.

Emmanuel Fontanilla, spokesman and lawyer for Misuari, said Misuari was safe and directly commanding the movements of his forces.

“I cannot divulge his location because this is tactical information that may be used against him, but he is directly commanding the movements,” Fontanilla said on the telephone.

The military could not immediately confirm whether Misuari was in command.

“We are still confirming if there were direct orders from Misuari himself,” Tutaan said.

Senate President Franklin Drilon condemned the MNLF attack on Zamboanga City and said the military should assert the government’s authority and crush the attackers.

“We should not let this pass. We should assert our sovereignty, and charge them in court,” Drilon said by phone.

Drilon, a former secretary of justice, said charges should be brought against Misuari if evidence showed he had a hand in the attack.

“Remember, he declared independence. The connection should be established,” Drilon said.

In Malacañang, Lacierda denied MNLF accusations that the government had scuttled the 1996 peace agreement with the MNLF.

“That is not true. In fact, there is an ongoing tripartite review process of the implementation of the [government-MNLF] peace pact through the facilitation of the Organization of Islamic Conference,” Lacierda said.

“Actually, there is going to be a meeting next week in regard to that,” Lacierda said, adding that Indonesia is the third-party facilitator in the talks between the government and the MNLF.

The Office of the Presidential Adviser on the Peace Process (Opapp) called on the MNLF and the military to stop the hostilities in Zamboanga City.

Undersecretary Jose Lorena of the Opapp told Radyo Inquirer 990AM that the 1996 peace agreement will not be terminated.

“We have no plans of disintegrating the 1996 peace agreement,” Lorena said.

Msgr. Crisologo Manongas, administrator of the Archdiocese of Zamboanga, appealed to the MNLF fighters to lay down their weapons to avoid further harm to civilians.

But Manongas said the government should not give in to the demands of the MNLF fighters.

“That’s unacceptable. We negotiate but we should not give in. Just imagine, they want to raise their flag here at city hall,” Manongas said.

The US Embassy in Manila advised Americans to stay away from Zamboanga amid clashes between government forces and Misuari’s followers.

The embassy also sent its condolences to the families of those killed in the fighting.

“Whether they were brave members of the AFP, PNP or civilians facing their future one day at a time, we share your sorrow at the loss of friends and loved ones,” the embassy said in a statement released Monday afternoon.—With reports from Nikko Dizon, Gil C. Cabacungan, TJ A. Burgonio, Tarra Quismundo, Jocelyn R. Uy and Miguel Camus in Manila; Jamie Elona and Julliane Love de Jesus, Inquirer.net; AFP and AP