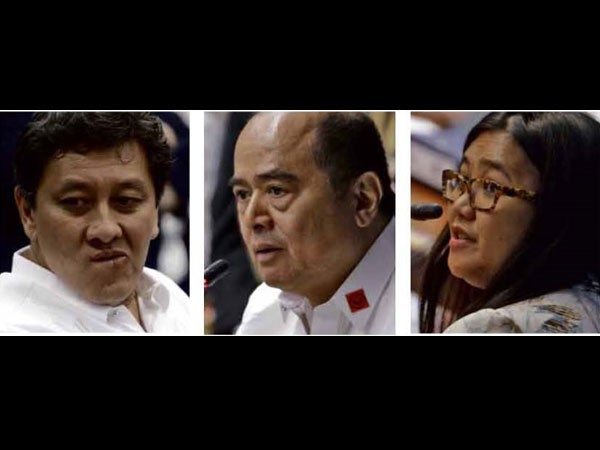 Because the legislators signed the liquidation report, “they can’t say that they didn’t know about the projects.”

This is what Sen. Teofisto Guingona III, chair of the Senate blue ribbon committee, told reporters on Thursday after the second hearing on the pork barrel scam.

“I am very sure of the three senators endorsing NGOs: Revilla, Estrada, Enrile,” Mendoza said.

Alan Javellana, the president of Nabcor during the 2007-2009 period reviewed by the Commission on Audit (COA), told the blue ribbon committee that the three senators had channeled parts of their Priority Development Assistance Fund (PDAF) to three of the eight NGOs identified with Napoles.

Those in the hearing were told that as part of the safeguards against abuse, the funds were released in four tranches, each tranche issued after the last one had been liquidated.

Mendoza said that Enrile, Estrada and Revilla or their representatives signed the report four times because the funds were released in four tranches.

Mendoza and Javellana testified in the Senate investigation a day after two new witnesses in the P10-billion pork barrel scam disclosed the existence of notebooks containing records of Napoles’ alleged dealings with Enrile, Estrada, Revilla and other legislators involving PDAF-funded ghost projects.

One of the new witnesses said Enrile, Estrada and Revilla were referred to in one of the notebooks by code names.

The code names, according to the witness, are “Tanda” for Enrile, “Sexy” for Estrada and “Pogi” for Revilla.

Mendoza told the Senate investigation that at least 10 members of the House of Representatives also endorsed NGOs linked to Napoles.

One of the congressmen, she said, was former Rep. Conrado Estrella III of Pangasinan’s 6th District.

Guingona asked Mendoza to bring documents to support her statements to the next hearing on Sept. 12.

The National Bureau of Investigation is looking into allegations that the 49-year-old Napoles, who is under detention, is the brains behind a scheme that defrauded the government over a 10-year period of  P10 billion in funds meant to ease rural poverty.

Agriculture Assistant Secretary Salvador Salacup, the head of the Zamboanga del Norte Rubber Estate Corp. (ZREC) from 2007 to 2009, said Enrile, Estrada and Revilla likewise used his agency to channel their PDAF to the Pangkabuhayan Foundation, an NGO separate from the Napoles group.

“I saw signatures of the legislators or, in letters, they mentioned their authorized representatives,” Salacup told the committee headed by Guingona.

Salacup said Estrada was represented by a certain Mr. Dinglasan; Enrile, by a certain Mr. Evangelista; and Revilla signed for himself. He said Valdez and Velarde signed the documents themselves.

In previous Inquirer reports, Jose Antonio Evangelista was identified as the deputy chief of staff of Enrile.

Salacup testified there was “another letter to the mother department”—the Department of Agriculture (DA). “I saw letters also from the legislators saying that their respective PDAF will be coursed through the DA,” he said.

Upon questioning by Sen. Sergio Osmeña, Salacup said that ZREC got just P10 million in PDAF in 2007.  This increased dramatically to P80 million in 2008.

“Were you not surprised?” Osmeña asked Mendoza about the huge amounts that suddenly passed through Nabcor. She replied: “We were surprised because of the huge influx of requests from the legislators.  We asked guidance from the DA onwhat we should do.  They told us to just implement it because that’s being asked by the legislators.”

Both Salacup and Javellana were taken to task by the senators for relying on the endorsements of the legislators when they poured the funds into the NGOs.

“Obviously your safeguards didn’t work,” Sen. Pia Cayetano said after being told by Salacup of the documentary validation done by ZREC.

Salacup mentioned a lean staff when asked why the government firm didn’t check on the facilities and projects of the questionable funds recipients.

Sen. Francis Escudero asked if the implementing agencies retained 3 percent of the PDAF coursed through them “supposedly, in theory, to supervise the project.”

“Yes, sir, part of the validation and administrative roles would be lifted from that,” Salacup said.

Escudero pointed out that under government rules there were only two modes of awarding a project to an NGO—by public bidding and by negotiated procurement.

“According to Mr. Javellana, the mere endorsement of a legislator already prompted you to award the contract to a particular NGO,” Escudero noted.

Salacup admitted being unfamiliar with the COA and government procurement procedures cited by Escudero.

“In that case, how can you follow it if you’re not familiar with it? Sir, the GPP circular states, number one, you can do a project with an NGO either by bidding it out among a lot of NGOs or by a negotiated procurement,” Escudero said.

“But if it’s a negotiated procurement, there are a lot of requirements, on top of your mayor’s permit, your SEC registration, your BIR financial statement. There are about 12 other items that you should have required in accordance with GPP circular. Did you require those documents, sir? It begs the question because if you don’t know about it, how can you require it?” Escudero added.

Javellana told the hearing that he met Napoles on two occasions at the coffee shop of Discovery Center in Pasig City.

“We were looking for investors and it’s not only Napoles that I met. There are many other prospective investors for Nabcor,” Javellana said when asked by what was so special about Napoles that the president of a state corporation would give her a briefing.

“To participate in a joint venture with our projects,” Javellana replied.

Javellana said he also knew former Napoles employee and scam whistle-blower Benhur Luy as he followed up documents with the corporation’s staff.  He, however, said that the two were introduced to him on different occasions. He said it was Manuel Jarmin, a DA employee, who introduced him to Napoles.

Mendoza, a former vice president for finance of Nabcor, also admitted meeting Napoles during a thanksgiving event at Discovery Center.  She said she was invited by Luy, who introduced her to Napoles.

“There were too many people,” Mendoza said when asked if she and Napoles talked about anything during their initial meeting.

Mendoza told the committee Luy personally followed up transactions related to the NGO he headed, the Social Development Program for Farmers Foundations Inc.

The whistle-blowers have said that People’s Organization for Progress formed by Napoles and headed by Merlina Suñas was the first NGO to secure a PDAF allocation from Enrile in 2008. Suñas said it was a “test case” for Nabcor by Napoles. According to a document dated Jan. 31, 2008, the Enrile PDAF was worth P25 million.

Suñas also confirmed Javellana’s testimony that it was Jarmin who introduced him to Napoles.

“He was our consultant and helped us in preparing documents,” said Suñas. She said Nabcor did not require performance bonds for their projects. With a report from Nancy C. Carvajal