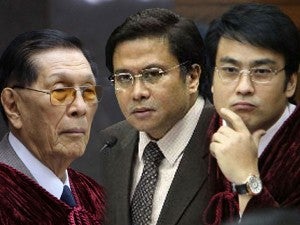 “Which legislators funnelled their funds through Nabcor to these NGOs – the eight NGOs?” asked Senator Teofisto Guingona, chairman of the Senate blue ribbon committee investigating the “pork barrel” scam.

Javellana said Senator Gregorio “Gringo Honasan also coursed his PDAF through Nabcor but it did not go to the NGOs identified with Napoles. Honasan’s PDAF, he said, went to Sagip Buhay People Support Foundation .

“I’m very sure of the three senators— Revilla, Estrada and Enrile,” said Mendoza when asked by Guingona to name the legislators who had endorsed their PDAF to the three Napoles NGOs.

Mendoza was not among those invited as resource persons in the hearing, but she was called from the gallery on Javellana’s suggestion.

Mendoza said the three senators endorsed their PDAF to SDPFF1, MAMFI, and People’s Organization for Progress and Development Foundation Inc.

She said Enrile endorsed the use of his PDAF for all three NGOs, while Estrada allegedly funnelled his funds to SDPFII and MAMFI while Revilla’s PDAF went to MAMFI.

Mendoza also identified some congressmen whose PDAF were allegedly transferred to either SDPFII and MAMFI.

It was only Enrile, who she said used his PDAF to the People’s Organization for Progress and Development Foundation Inc.

Mendoza said most of the legislators signed the endorsement letters and the releases of funds to the NGOs while a few had assigned somebody from their offices.

She said she did not find anything suspicious about the transactions.

“[None], they are complying so far,” Mendoza said.

Still under intense questioning by Guingona, Javellana, who was head of Nabor from 2007 to 2009, admitted that he met with Napoles herself four years ago.

He said he met with Napoles twice at the coffee shop of Discovery Suites in Mandaluyong City.

“I was invited to go there,” said Javellana, adding that he and Napoles only had coffee in the hotel.

Asked again by the senator what they discussed during their meetings, Javellana said: “Wala kaming pinag-usapan na PDAF. I briefed her about Nabcor.

Their second meeting, Javelllana said, was just a follow-up of what they had previously discussed.

But when Senator Francis “Chiz” Escudero asked why he would go out to meet with Napoles, Javellana said because she was among the potential investors for Nabcor projects.

Aside from Napoles, Javellana also admitted he had dealt with whistle-blower Benhur Luy, who represented Napoles’ NGOs .

Mendoza said she had also dealt with Luy, who had frequently visited their office. In fact, she said, it was Luy, who introduced her to Napoles.

“I met her once… I was invited in the thanksgiving Mass in Discovery Suites,” she said of Napoles.

But Salacup clarified that the foundation was not linked to Napoles.

“I recall because he [Revilla] only had one project,” Salacup said.’

There was one “communication” though, he said, from the office of Estrada signed by the senator himself.

He said there was also a letter signed by a certain Attorney Lucila Reyes.

Both Valdez and Velarde, he said, signed their endorsement letters to the NGOs.