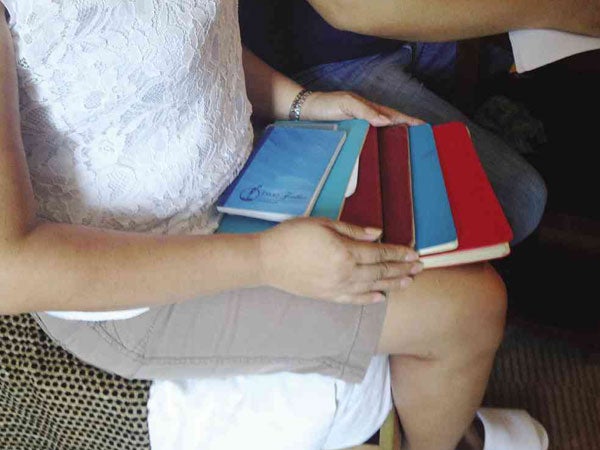 Two witnesses in the P10-billion pork barrel scam will submit to the National Bureau of Investigation five notebooks containing evidence of Janet Lim-Napoles’ dealings with lawmakers, the Inquirer has learned.

The notebooks, in different sizes and colors, contain records of cash transactions, lists of properties, bank accounts and other information said to be related to the operation of Napoles’ business company JLN Corp.

“These notebooks were records from 2012 up to August 2013 and all information contained in these notebooks, we personally wrote,” said one of the two new witnesses who came forward recently to testify against Napoles.

In an interview with the Inquirer in their safe house somewhere in Metro Manila, the witnesses said they worked for Napoles as presidents of bogus NGOs until she was ordered arrested by a Makati City court for the alleged illegal detention of Benhur Luy, the principal witness in the pork barrel scam.

Napoles, who surrendered to President Aquino last week, is detained at a police camp in Laguna province on charges of serious illegal detention. The NBI plans to bring plunder charges against her, alleging that she siphoned off P10 billion in legislators’ allocations from the Priority Development Assistance Fund (PDAF) into her bank accounts through bogus nongovernment organizations (NGOs).

A lawyer for the two new witnesses, Lourdes Benipayo, was present during the interview.

An entry in the first blue notebook showed that P20 million from one of the whistle-blowers’ NGO was allotted for “Kuya.”

“‘Kuya’ and ‘Sexy’ are the code names for Sen. Jinggoy [Estrada]. ‘Pogi’ is for Sen. Bong [Ramon Revilla], and ‘Tanda’ is for Sen. [Juan Ponce] Enrile,” the NGO president said.

In an earlier interview, Luy told the Inquirer that it was Napoles who chose the code names for the senators.

Contacted by the Inquirer for comment, Estrada said he would issue a statement after the whistle-blowers had submitted the notebooks to the NBI.

“I will react when these (the notebooks) have been submitted to the NBI,” Estrada said.

Enrile and Revilla had yet to respond to the Inquirer’s request for comments as of press time last night.

All senators who have been implicated in the pork barrel scam have repeatedly denied any wrongdoing.

The second notebook, with a red cover, contained lists of Napoles’ properties.

The third notebook (blue)  contained records of documents received by the whistle-blowers on behalf of their boss, credit card numbers and details of credit-card transactions.

The fourth notebook (red) contains the names of contact persons and their phone numbers.

The fifth notebook (blue-green) is an organizer of the whistle-blowers.

One of the two new witnesses said she delivered money to the house of Ruby Tuason, social secretary of former President and now Manila Mayor Joseph Estrada.

In their testimony, the new witnesses claimed they were ordered by Napoles to convert millions of pesos to US dollars.

“We exchanged pesos to dollars [at various money changers] that offered the lowest exchange rate,” the witness said.

“The US dollars were then sent abroad through various money couriers to pay for purchases of properties in America,” they said.

Luy, in an earlier interview with the Inquirer, said Napoles’ daughter Jo-Christine had an account at Wells Fargo Bank in Irvine, California, and the account number was 920026595958

He said Napoles’ brother, Reynald Lim, had an account at Bank of America in San Diego, California, with the account number 1216143383.

The new witnesses submitted as annexes to their sworn statements deeds of sale for various local properties in the name of Napoles’ oldest son, James.

They also submitted as evidence documents signed by those members of the House of Representatives designating their NGOs as beneficiaries of the legislators’ pork barrel allocations.

“I was with her since 1997 up to the time she was ordered arrested, and also served as custodian of records of her properties,” said one of the new whistle-blowers.

In their affidavits, the new whistle-blowers said Napoles claimed to have “contacts” in the Office of the Ombudsman and in the Sandiganbayan, and that she expected to be cleared of the charges against her in four to five years.

In an affidavit submitted to the NBI on Thursday, the 11th whistle-blower, said hours before surrendering to President Aquino on Wednesday night, Napoles called her up to plead for loyalty from her employees.

“She was crying and asking me not to turn my back on her, that we should stay together,” the witness said.

The witness said Napoles promised to support her employees even if it costs her all her money.

“Just wait. My TRO (temporary restraining order) will be issued soon,” Napoles said in Filipino, according to the 11th witness.

The witness said she was at the Department of Justice when Napoles called.

The witness said that when her phone rang again, showing the same number used by Napoles, it was Cheryl Jimenea, former appointments secretary of former President Estrada, who was on the line.

She said Jimenea instructed her to meet her in a restaurant in Trinoma, Quezon City, at 7:30 p.m. on Aug. 28.

The witness said she and some other NGO presidents went to see Jimenea, who came with a lawyer who instructed them to “implicate Benhur (Luy)” in the event the NBI questioned them.

“Madame did nothing wrong to you so maybe you have nothing against her. So say that it was Benhur who gave you instructions and it was to him that you turned over the money,” the witness quoted the lawyer as telling them in Filipino.

The witness said Jimenea gave her and the other NGO presidents P20,000 each at the end of the meeting. The witness did not say how many whistle-blowers were present.

She said Napoles “ordered her papers and documents in the office to be moved to her residence in Pacific Plaza Tower, and the documents for all the NGOs were destroyed.”

Napoles also ordered the destruction of all original documents pertaining to the bogus NGOs, the witness said.

She said Napoles ordered the papers destroyed so that the bogus NGOs could not be traced to her.

At least six shredders were used to destroy the documents, the witness said.

“Due to the sheer volume of documents that we shredded, the machines eventually broke down,” she said.

Napoles, she said, “feared that the National Bureau of Investigation might raid the office and Pacific Plaza.”

She said Napoles got adjoining rooms at Discovery Center and gave it the code name “parking.”

“In the new office, we temporarily held office and continued to shred more documents,” the witness said.

She said Napoles also ordered them to execute affidavits stating that Luy was the brains behind the dummy NGOs.

Her statements corroborated the testimony of the other whistle-blowers, all employees of Napoles who designated them presidents of the alleged bogus NGOs.

The 11th whistle-blower also submitted to the NBI an affidavit detailing 40 residential properties that Napoles allegedly owned, including five apartments in Primea, one of the swankiest residential buildings on Ayala Avenue in Makati City. An apartment in Primea is worth at least P75 million, the Inquirer was told.

Sworn statements submitted earlier by the whistle-blowers said Napoles owned 28 properties  in such posh residential subdivisions as Ayala Alabang, Forbes Park and Dasmariñas, but the Bureau of Internal Revenue said last week it had failed to locate properties under the name of Napoles or her family or her NGOs.

The latest whistle-blower said Napoles closed her bank accounts and those of her NGOs in June, two months after Luy began to talk to NBI investigators about the extent of his employer’s alleged transactions involving five senators, 23 congressmen and government officials.

“She closed the accounts, but she also opened new ones. She was afraid that Benhur knew about her bank accounts,” said the 11th whistle-blower.

The witness could not give an estimate of how much was transferred, but said she had evidence that would show P320,154.48 was remitted to Napoles from 11 NGO accounts in Metrobank’s Magdalena Street and Jose Abad Santos Avenue branches.

Three of the whistle-blowers claimed they were with Napoles at the time she received a phone call that an arrest warrant had been issued against her and her brother Reynald.

“She never expected the dismissal of the illegal detention case (brought by Luy) would be reversed. She was even happy and confident on that day,” said the 11th witness.

She said the employees were not told about the arrest warrant, but learned about it because Napoles’ eldest daughter, Jo-Christine, was crying. “There were nonstop phone calls coming in,” she said.

The three whistle-blowers said they were at South Gardens Unit at Pacific Plaza in Makati City having a meeting with Napoles when the news of her arrest broke out. They left Napoles and her daughter at 7 p.m.

The 11th whistle-blower said she started working for Napoles in 1997 as a “utility girl” for Jo-Chris Trading, with offices in Pasay City. In 1998, the trading company moved to the Philippine Navy Officers’ Wives Association building in Taguig City. During that time, Napoles also owned a parlor, barber shop and a meat shop in the same building.

One of the new whistle-blowers claimed she also served as accountant for Napoles, and another said she served only as president of an NGO. With a report from Norman Bordadora