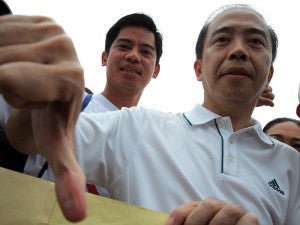 MANILA, Philippines – Whistleblower Rodolfo “Jun” Lozada Jr. on Tuesday said he does not believe that President Aquino will truly abolish the pork barrel.

“They’ll probably just change the name,” he said in an interview with Radyo Inquirer 990AM.

Lozada, who testified against the Arroyo administration’s national broadband network project, said he hoped the clamor against the pork barrel system will “unravel more truth.”

“I am sad that until now…we thought such wrongdoings were over but [they are] still happening,” he said.

He said he was worried about the other whistleblowers and would like to reach out to them.

“I’ve been trying to send word to them. They have to deepen their faith more…There will come a time when the people will disappear. You will be left alone…There are many witnesses who [would] give up [and retract their statements],” he said.

Asked if he knew businesswoman Janet Lim-Napoles, the alleged mastermind of the P10-billion pork barrel scam, Lozada said she’s just one of the dealers.

“There are many more who are doing that. They have their own specializations – there are those for hard projects, and those for soft projects,” he said.

Lozada was the former president of the Philippine Forest Corporation (PhilForest) from 2007 to 2008.

On Monday, the Philippine Daily Inquirer reported that around P500 million worth of pork barrel funds (or Priority Development Assistance Fund) were funneled to fake non-government organizations through PhilForest from 2010 to 2012. At least P428.5 million was allocated for the production of jatropha as biodiesel feedstock.

The government corporation will supposedly be included in the Commission on Audit’s next special report.

Lozada said that now that the “spirit of truth is upon us again,” accountability must be pursued.

Lozada also said President Aquino is guilty of the “sin of omission” for allowing those close to him to engage in unscrupulous activities.

“Those around him will not be able to do those things if he did not let them,” he said.

“If I will liken corruption to a poison tree bearing poison fruit, what this government is doing now they will only cut the branches whose fruit were being picked by another group but if the fruits are being picked by their group they will allow the tree to grow.”

The former consultant on the national broadband project said he tried to warn Aquino about some of the people under his administration engaged in corruption but were told by insiders to just drop the issue.