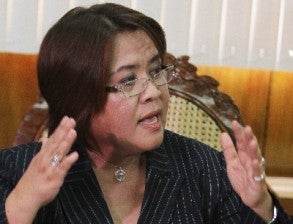 MANILA, Philippines — Justice Secretary Leila de Lima said Tuesday that there were a number of lawmakers who would be charged in relation to their alleged misuse of their Priority Development Assistance Fund (PDAF) or “pork barrel”.

De Lima made the statement in a press conference, a day after Malacanang announced that the newly-formed Inter-Agency Anti-Graft Coordinating Council (IAGCC) would “investigate and prosecute” all those involved and “recover” assets that were lost in the scam.

“The cases that will be filed by the NBI, some lawmakers will be included pending the evidence that will be gathered. The NBI is organizing the documentary support before filing the case. It will include already some lawmakers,” she said.

The NBI (National Bureau of Investigation) is set to file the charges before the Office of the Ombudsman in a week or two.

De Lima, one of three government officials in the IAGCC, however, refused to reveal how many lawmakers were involved, and their names. The other two IAGCC officials are Ombudsman Conchita Carpio-Morales and Commission on Audit chairperson Grace Pulido-Tan.

But De Lima said the IAGCC did not have a definite timetable in its investigation since the case build- up would take time.

“It is always difficult to fix a definite timetable. The tendency is, because we are pressured, the results would be half-baked,” she said.

Carpio-Morales appealed for patience from the public, saying that the conduct of preliminary investigation was part of the due process.

But De Lima lauded COA for providing a comprehensive report that would serve as reference for the “gathering of necessary or supporting documentary evidence.”

For her part, Carpio-Morales said they have requested documents from the Securities and Exchange Commission, Department of Budget and Management, and The Anti-Money Laundering Council.

The IAGCC will also trace the paper trails and pertinent documents as provided by the Department of Finance (DOF), NBI, Civil Service Commission (CSC), and the Office of the President.

Asked about Janet Lim-Napoles, the alleged mastermind in the P10-billion pork barrel scam, De Lima said there was no indication that Napoles, and her brother Reynald Lim, have left the country.

“All existing leads that have been gathered point to the fact that they are still here but they are hiding,” De Lima said.

The siblings, tagged as “fugitves,” have been in hiding since an arrest warrant was released against them for the illegal detention of whistle-blower Benhur Luy.

She also said that the NBI has started to invite certain personalities, aside from the whistle-blowers, that could provide leads to the PDAF misuse by legislators and others involved.

IAGCC to probe, prosecute  those who misused PDAF