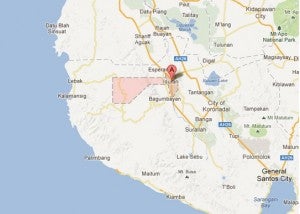 COTABATO CITY – A town councilor of Isulan, Sultan Kudarat province remained in critical condition at an undisclosed hospital after being shot on Monday by two men riding in tandem on a motorbike, the police said Tuesday.

Superintendent Ruel Surmese, Isulan police chief, said Rene Aristoza, 50, was standing in front of his home in Barangay (village) Kalawag 2 when attacked around 6:30 a.m. Monday. The gunmen quickly fled after the incident.

“He was hit on the neck and remained under observation at a private hospital,” Surmese said.

He said the police were investigating the identities and the motive of the gunmen even as Aristoza’s relatives were equally puzzled as the victim had no known enemies.