BI to DFA: Watch out for passports with Napoles, brother look-alikes

MANILA, Philippines — The Bureau of Immigration (BI) warned the Department of Foreign Affairs (DFA) against approving and releasing passports with photos resembling Janet Lim-Napoles and her brother, both wanted by authorities.

Napoles, the alleged mastermind behind the P10-billion pork barrel scam, and Lim were served an arrest warrant by the Department of Justice and Makati City regional trial court for serious illegal detention of the whistle-blower Benhur K. Luy.

Mison confirmed that the siblings were still in the country, based on the immigration’s travel records.

As part of the nationwide manhunt operations, the “wanted” pictures of Napoles, and her brother were posted in the airports.

Mison said strict measures were implemented by the Immigration officers especially in airports and seaports. The BI also told its personnel to be “always alert” if they enter through the ports. 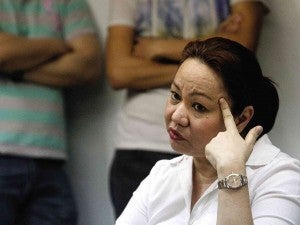 He also advised the foreign affairs department to be cautious when processing passports since Napoles and Lim, who were said to have heavily-armed protectors, might file for new passports under different names.

After warrants of arrest were issued to the two, the DFA immediately cancelled their passports to prevent them from leaving the country.

The Court of Appeals (CA) also froze the 415 bank accounts of the businesswoman as well as the accounts of her family members, relatives and JLN Group of Companies employees.

Read Next
Leader of gun-for-hire gang in Davao Sur, Sarangani nabbed
EDITORS' PICK
Over 3 Million worth of prizes to be won at Smart Padala’s SENDali Manalo Promo!
Gear up and get ready to play with Yamaha Mio Gear
Acer starts the year off strong with the Aspire Vero National Geographic Edition
If elected VP, Sara Duterte will push for mandatory military service for all Filipinos
Senate bill seeks to penalize employers requiring employees to work during rest hours
Marcos-era elections: Not what his son signed up for
MOST READ
Jose Manalo’s son Benj pays tribute to late mother: ‘You’re a testimony of God’s love’
‘Sampal sa gobyerno:’ Drilon wants unvaxxed PAO chief barred from working
Vice mayor slams Vico Sotto for turning Pasig into a ‘puro palabas’ city
Bongbong-Sara tandem names 7 candidates in initial senatorial slate
Don't miss out on the latest news and information.